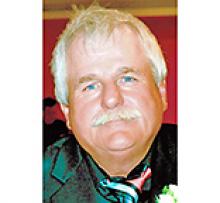 It is with great sadness that we announce the passing of Gary Hoshowski on Friday, February 26, 2021, at the age of 62 years.
He will be lovingly remembered by his wife of 32 years, Debbie, children, Jennifer (Richard), Lisa (Mike), Jason (Brittany and son Cameron), and Wayne, granddaughter Annie, mother Victoria, sister Linda (Warren), sister-in-law Marianne, as well as nieces, nephews, aunts, uncles and countless friends. Gary was predeceased by his father Michael, brother Walter, nephew Matthew and in-laws, Robert and Sharon.
Gary grew up in St. Martin, Manitoba and later moved to Winnipeg where he met and married Debbie and where they raised their family. He was overjoyed when he later became a grandfather.
Gary was proud of his work as a truck driver, which he had been doing since he was 18 years old. Each winter he and his truck would take to the ice roads, helping supply remote communities - first in northern Manitoba and later in Ontario. His life as a trucker led him to make many friends in the industry as well as the communities he served.
He showed his friends and family he loved them by being a helper, always ready and willing to do anything needed when there was a job to be done and this is where Gary's loss will be felt most. In his own way Gary was a jokester, always up for a laugh whether it was with him or at him.
There will be no formal service held at this time, we will gather to celebrate Gary's life when we can do so safely together.
In lieu of flowers, please consider making a donation to the Heart and Stroke Foundation.