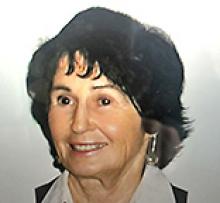 Gloria Lucille (Anderson) Klein was born on March 18, 1930, in Winnipeg, and passed away peacefully Tuesday, February 23, 2021, in Amica Lions Gate, West Vancouver.
She is survived by her devoted husband, Peter Klein, daughters, Andrea Westcott and Tara Kobewka, sons-in-law, Doug Westcott and Dale Kobewka, stepdaughter Andrea Klein, and grandchildren, Ana Westcott, Will Westcott and partner Kirstie Lannon, and Rya Kobewka and partner Julian Kenchenten. She was predeceased by her parents, Charlotte and Cyril, her brother Glenn Anderson, her sisters-in-law, Beth, followed by Gwen Anderson, and first husband, Arnold Little.
Gloria will be fondly remembered by her three Anderson nephews and one niece, Riley, Todd, Reid and Nicole, and their spouses and large, extended families, as the cousins grew up together over many summers at Victoria Beach, Manitoba. She then later worked with some of them at her brother Glenn's Vancouver restaurant, The Kettle of Fish, where she hosted an annual family Christmas party.
She will be missed by her many friends, particularly those from Capilano Golf and Country Club, where she was an active member from 1982, along with her various bridge partners over the many years she played. Another of Gloria's passions was in interior design and decor. She earned a Bachelor of Interior Design and a Diploma in Interior Decoration from University of Manitoba (1950). Gloria's questing spirit led her on many an adventure, travelling to distant parts of the globe, ever planning the next trip, skiing into her mid 70s at Whistler.
Gloria - generous of spirit, fun-loving, kind, full of energy and affection.
A special thank you goes out to all the wonderful caregivers at Amica Lions Gate where Gloria spent the last three weeks of her life. As a result of Covid-19 restrictions, the funeral service on March 14 at Hollyburn Funeral Home must remain family only.
As Gloria was a great lover of animals, in lieu of flowers, a donation in Gloria's name to the Winnipeg Humane Society or, here in BC, to the SPCA would be gratefully appreciated.
Please contact a member of the family or Hollyburn Funeral Home, if you would like more information.