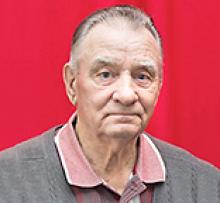 Peacefully on February 27, 2021, at the age of 89, Dad passed away at Goodwin Lodge with his daughter Roxane at his side.
He was predeceased by his wife Laura (2019), and son Roger (2016). He is survived by his daughter Roxane (Craig), grandchildren, Kristen (Kirk), Jennifer, Wesley (Brenna), Michelle (John) and Brayden; his son Ross (Sonya), grandchildren, Kaila, Kailen, and Rye; and his son Rodney (Diana), grandchildren, Jade (Garrett), Jake, and Jacey.
Surviving family members are sisters, Kay and Gloria; as well as sisters-in-law, Helen and Myrtle, along with many nieces and nephews.
He is now reunited with his parents, Fred and Anna; sister Mary; brothers, John, Harry, Mike, Steve, Alex, Joe, Kost, Paul, and Dan; sister-in-law Hattie; brothers-in-law, Mike and John; niece Linda; and nephews, Clayton, Gary, and Brian.
Dad was born on the family farm in Wheathill. In 1949, he moved to nearby Chatfield to operate his father's General Store. Mom and Dad were married in 1954. Together, they operated the store until 1970, when they made the big decision to move the store and attached house to Teulon and converted the building into a restaurant. With their four children, they opened G & L Restaurant in 1971, quickly becoming famous far and wide thanks to Mom's incredible cooking. Expansions included The Cardinal Lounge and Motel, and eventually they sold the highly successful establishment in 1986.
Dad entered the construction business with his partner, Nick, in 1965, when they started land clearing. Later, they worked for the municipalities of Armstrong and Rockwood building roads, in addition to digging dugouts and drainages. Dad was an active business owner until just a few years ago as his health began to decline. Rodney worked alongside Dad for 20 years.
Dad was an avid outdoorsman, and for many decades he was well-known for his trapping skills. One of his many pastimes was digging Seneca roots to be sold for medicinal use. Dad operated a grain farm near Silver in the '70s.
His lifelong passion was baseball. In 1946, he joined the Chatfield baseball team, along with four of his brothers, and as their pitcher he lead the team to dominance throughout the Interlake. In the early '50s, he was invited to a professional baseball tryout in Florida but declined to continue operating the store. The Chatfield team was inducted to Manitoba's Baseball Hall of Fame in 2003 in recognition of their great success from 1952 to 1957. While playing in tournaments with Chatfield, Dad played league-organized baseball with the Balmoral Orioles. He became involved with the Teulon Whips in 1971, winning back-to-back provincial titles in 1974 and 1975, when they also went on to win the Western Canadian championship. He continued to play, coach, and manage Teulon men's baseball over the course of five decades. Serving as a town council member in Teulon throughout the 1980s, Dad had an essential role in the development of Green Acres Park. In addition to their numerous provincial titles, the Teulon Cardinals' all-time highlights included a spot at Nationals in 1991 and again in 1998, which was also the year that Dad had been inducted to Manitoba's Baseball Hall of Fame for his individual achievements both as a player and as a coach. Dad was involved in baseball for 68 consecutive years (1946 to 2014). Dad pitched his last game when he was 68 years old at Chatfield Oldtimers' tournament in 2000; ironically the same place where he threw his first pitch in 1946 with the Chatfield Cardinals. Ross and Rodney played for the Teulon Cardinals for many years, keeping the team active until 2014. Many have cherished memories of Dad's baseball journey. Sport truly does create friendships and memories that last a lifetime!
We would like to thank the staff at Teulon Hospital and Goodwin Lodge for their care and compassion over the past few years.
Special thanks to Ken Loehmer for his thoughtfulness and unwavering support. Sincere gratitude to Father Peter Chorney and Father Barry Schoonbaert.
Family and friends are invited to leave condolences or to share memories on his tribute wall at www.klfuneralservices.ca.
In lieu of flowers, please consider donations to Teulon Senior Resource, Box 418, Teulon, MB R0C 3B0, or IERHA - Attn. Goodwin Lodge, Box 89, Teulon, MB R0C 3B0, or a charity of one's choice.