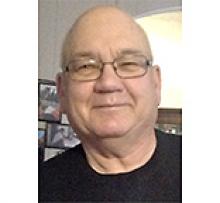 It is with great sadness in our hearts we wish to acknowledge the passing of Ron Ladobruk, beloved husband of 50 years to Linda; father to Jim (Kim) and Michael (Erika); and grandfather to grandsons, Ronnie (Erika) and Travis (Caitlin), and his precious granddaughter Shayla. Also left to cherish his memory is his family, Debbie (Dwayne) Thiessen; Mitch Whitney, Elaine (Ed) Marion, Theresa (Greg) Regier, Jeff Ladobruk, and many nieces and nephews.
He was predeceased by his parents, Jim and Elizabeth; siblings, Norman, Gerald, Phyllis Whitney.
"Captain Ron" retired from Gardewine in 2019 after 45 years as a leased operator due to health concerns, but his heart was still in trucking. He was "born to be a trucker". At a very young age, Ron could be found fixing lights or greasing his dad's old truck. Ron worked hard to give his family the home he thought we should have.
Ron often said he was born two pounds and fought to survive. He joked that he had it tough from the start.
Ron's love of trucks was only surpassed by his love of Ukrainian music. He would listen often to his hundreds and hundreds of CDs.
Ron was proud of his boys and the men they have become. His grandsons and the respect they had for their Papa, and of course his special granddaughter. Ron's honesty and integrity were traits that carried him through many life's friendships.
Ron developed many health problems over the years, and fought all of them with all he could. He told us on February 26, 2021 he was going "home, home". So we will miss him but let him go on to his next journey free of pain and suffering.
In accordance with Ron's wishes, a formal service will not be held at this time. A celebration will be held at a later date when family and friends can safely gather.