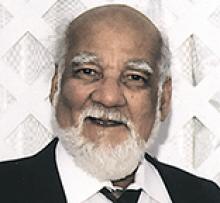 Tony passed away, peacefully in his sleep, on the morning of March 1, 2021 at St. Boniface Hospital.
He is survived by Cara and Corey (grandchildren), Patti (daughter-in-law), Roger (son), as well as siblings, cousins, nieces and nephews spread across the world.
Tony was born in Grenada on August 5, 1929 and was the middle brother to seven other siblings.
At an early age the Samuel clan moved from Grenada to Trinidad. Dad quickly made a name for himself as an athlete particularly in tennis, table tennis and cricket. He won several West Indian and Trinidadian championships in both Tennis and Table Tennis. This, besides his good looks and his dogged courtship, made an impression on his future wife Sylvia and they were married on April 5, 1952. Dad worked for Texaco until he, Sylvia and newborn Roger moved to England in 1956. Here things really bloomed for Dad. He studied Law while working fulltime and sat his bar exams in 1963. From there he worked with the British Government but never gave up on tennis and won several championships on clay and grass courts.
In September 1972, Tony, Sylvia and Roger moved to Canada where Dad worked for the Manitoba Land Titles as a supervisor until his retirement from work in 1984. Then he became a fulltime Grand Pa and always loved being around Cara and Corey.
Family was the most important thing in Dad's life. From his unwavering support for his son, grandchildren and daughter-in-law, to making sure he kept in contact with all his siblings, nephews, nieces and cousins. Dad always loved being around family. Christmas and New Years always involved family gatherings, lots of laughter and pure happiness. The rest of the time family would drop by, have supper and drinks and play cards until the wee hours. He also in later years visited his sister (Eldina), his niece (Doreen) in Florida and brother (Lyle) in England.

We will all miss my Dad's smile,
his love and caring manner.

Our sincere thanks go out to the staff of 5B and 5E at St. Boniface Hospital for their care and compassion during Dads stay.
A private family funeral will be held at Glen Lawn Funeral Home, on March 13 at 10:00 a.m. It will be live streamed to allow your participation.