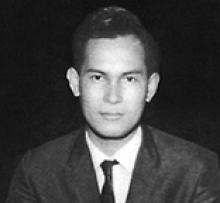 Antonio "Tony" Dalayoan Sr. passed away peacefully on Saturday, March 6, 2021 at the Grace Hospital in Winnipeg, MB due to diabetic complications.
Tony will be lovingly remembered by his wife of 55 years, Gemma (née Derpo); his children, Maria Carmelita (Crisostomo), Antonio Jr., Fernando (Claude), Hernando (Linda), Maria Estela (Arthur), and Jonato (Marie). He will also be fondly remembered by his 13 grandchildren, Christopher, Ricardo, Angelica, Sineado, Anselm, Aaron, Leonardo, Herlinda, Michael, Madison, Matthew, Josiah, and Nova, as well as his two great-grandchildren, Lalani and Adaline. Tony will also be dearly missed by his youngest sister who also lives in Winnipeg, Susan Cuevas (Ric) and by his many other siblings, family, friends and relatives around the world.
Antonio was born in Paniqui, Tarlac, Philippines on December 27, 1938 where he grew up working on the family farm. He learned to speak four Filipino dialects: Kapampangan, Ilocano, Pangasinan, and Tagalog and also learned to speak and write Brazilian Portuguese while living in Brazil in the early 1970s. After studying engineering at Mapua Institute of Technology, he worked as a supervisor for Sugar Central and also at the Electric Plant in Paniqui, Tarlac. He later moved to Brazil where he lived for five years and held a number of management positions working for Petro Chemical companies prior to moving to Canada.
In February 1976, Antonio immigrated to Winnipeg and eight months later, his wife and children came to join him. He worked for Dominion Tanner and then later worked for Canadian National Railways where he retired as a Machinist.
Antonio was very fond of fishing, earning the title of Grand Master Angler after having caught his last of the 10 species in Portage La Prairie in 1995.
As a father he was very firm but caring, and as a husband, he was very faithful and loving. Antonio was so loved and admired by his family and numerous relatives and friends. He will be forever missed and forever in our hearts.
Viewing will be held at Chapel Lawn Funeral Home on Friday, March 12, 2021 from 6:00 p.m. to 11:00 p.m. and Saturday, March 13, 2021 from 9:00 a.m. to 4:00 p.m. Please contact family to arrange a time and for live streaming details.
Funeral service will be held on Monday, March 15, 2021 at 11:30 a.m. at Our Lady of Perpetual Help Church, 4588 Roblin Blvd. Live streaming will be available on the parish website.