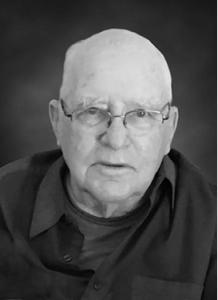 RADFORD: Ronald Cameron (1929-2021). Ronald Radford, beloved husband of Maxine, passed away at his residence, Hillcrest Place Personal Care Home, on Tuesday, March 9, 2021. Ron was the fifth son of Robert and Viola Radford of Keyes, Manitoba. He was born at Pine Creek, MB and attended Livingstone and Keyes schools while growing up in the Keyes area. Ron met Wilma Maxine Tennant of Russell in 1948 while Maxine was teaching at several schools in the Keyes and Neepawa area and they were married in Gladstone, MB in 1952. During the 1950s, Ron worked for Manitoba Hydro and the CPR, working out of Keyes, Gladstone, Woodside and Westbourne. Later, as he bid out as First Man, he worked at Elm Creek, Roland, Murray Park – Winnipeg, Emerson and Marquette. Ron and Maxine moved to Gladstone in 1958 and lived there until September 1963. In 1963, Ron started work at the United Grain Growers (UGG) Elevator, Gladstone with Howard Kerr. Ron and Maxine had their first two sons, Laurie and Douglas, while living in Gladstone. After 6 months training, he was moved to Strathclair as elevator agent. They had their third son Gerald while in Strathclair and spent ten years engaged and active in the community, their children's education, music lessons, and sports. In 1973, they moved to Rivers where Ron spent 17 years as a UGG manager before retiring in 1990. They continued to live in Rivers where Ron enjoyed golfing, curling and playing music until 2012 when he and Maxine moved to Brandon. Ron was the President of the Rivers Legion for many years, a proud member of the Rivers Masonic Lodge, and was very active in all of the communities in which he lived: coaching hockey and baseball, helping with Scouts and church groups, driving his sons to their rock band rehearsals, and serving as the keeper of the knives and master carver for community banquets. Ron loved sports and was an avid golfer throughout his life, as well participating in curling and other community sports. He was also known as an accomplished and formidable cribbage player. Music was an important part of Ron's life from an early age. He played guitar, piano, harmonica, and old-time fiddle but was best known for his accordion playing at dances, seniors' residences, concerts, house parties and family gatherings. He often played accordion duets with his sister Muriel, with various bands in the communities in which he lived and was a long standing and valued member of the old-time band in Rivers, The Friendly Four. Ron and Maxine loved to travel and took their three sons on many camping trips throughout Manitoba and western Canada. In their later years, they traveled to the Maritimes, Québec, Ontario, British Columbia and Alaska to explore and visit family. Ron was a generous, loving husband, father and friend and leaves behind his wife Maxine; three sons Laurie (Miriam), Douglas (Cindy) and Gerald; two grandchildren Mikaela and Kesia; two brothers Barry (Norma) and Keith; sister-in-law Lorna; and many, many beloved cousins, nephews and nieces. The family will cherish Ron's memory privately. We will all think of him and miss him dearly. Donations in memory of Ron may be made to the Alzheimer Society of Manitoba-Westman Region, 437-9th Street, Brandon, MB R7A 4A9.