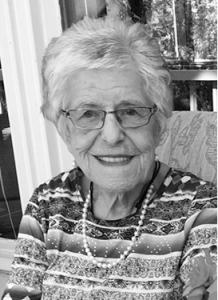 BURGESS: Jean Elizabeth (Witherspoon) Burgess has passed away peacefully at the Brandon Regional Health Centre Palliative Care on Tuesday, March 9, 2021 with her three sons at her side. Jean was born in Port Arthur, Ontario to Willard and Elizabeth Witherspoon on October 15, 1931. The family moved to Glenboro in 1939. She graduated from high school there and went on to become a Registered Nurse from the Winnipeg General Hospital, now the Health Sciences Centre, in 1953. She loved being a nurse and enjoyed seventy year friendships with many former classmates. She took a diploma course in Public Health from the University of Manitoba in 1955 and was posted to Minnedosa where she met Ken Burgess. They were married July 2nd in 1956. They moved to Brandon in September of 1957 and remained there the rest of their lives. They raised three sons who they were so proud of. Jean worked and supported Ken in all his activities. Mom enjoyed people, entertaining and bridge. She would always call on birthdays, anniversaries or write a letter to lift someone's spirits. She felt blessed to live in Brandon. She dearly loved her grandchildren and great grandchildren and the time spent with them at Brandosa Beach. Health problems caused some setbacks but she always overcame them with a positive attitude. Jean was predeceased by her loving husband and best friend in 2005; her only sister, Ferne Wilson and her brother-in-law, Harry Wilson. She is survived by her beloved sons and families; son, John (Brenda); and their family: Bill (Kyla and Sam), Mark (Laurasa, Jessa and Luke), Alex (Brittany, Douglas, James and Thomas) and Sarah (Kurt Hunter, Brooklyn and James); son, David (Susan); and their family: Ryan (Lisa, Austin), Michael and Blair, as well as extended family, Brittany, Alison (Chris, Fraser and Max); son, Paul (Donna, Lee and Avery); brother-in-law, Jim Burgess (Lynn) and families and special nephew, Jack Wilson (Mur) and families. The family wishes to thank all the doctors and nursing staff for all of their care. As per her wishes cremation has taken place with a graveside service at a later date to cherish her memory. Donations in memory of Jean may be made to the Brandon Regional Health Centre Foundation, 150 McTavish Avenue East, Brandon, MB, R7A 2B3.