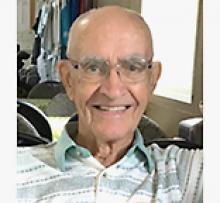 On Sunday, March 7, 2021, Aimé Bourgeois rendered his soul to the Lord at the age of 93 years after a very courageous battle with cancer. He fought with such courage, tenacity and grace. His never-give-up attitude was truly awe-inspiring to the many who knew him.
He leaves to cherish his memory his daughter Louise, son-in-law Patrick Catellier and three precious grandchildren, Roger (Jacqueline), Véronique and Richard (Kara). He also leaves his loved and devoted wife of four and a half years, Edith Rondeau, who bravely stood by his side during his battle with cancer, her children, Denis+ (Nicole) Rondeau, Yolande (Mike) McCannell, Gilles (Janine) Rondeau, Richard (Ilona) Rondeau, Annette (Daniel) Dion.
Aimé was predeceased by his first wife of 54 years, Priscille (Aquin) Bourgeois, and several brothers, brothers-in-law, sisters and sisters-in-law, who have left us too soon, but are not forgotten.
He will also be missed by his brother, Gérard (Rolande) Bourgeois and sister, Jeanne Blérot, brother-in-law, Ronald Aquin (Joyce), sisters-in-law, Irene (Stan) Fisette, Dolores Aquin, Rolande Turgeon, Pauline (Jack) MacRae, Lorraine (Louis) Perrin, Denise Aquin. There are many nieces and nephews too numerous to list herein, but fear not, he remembered your names and your spouses' names with his extra-sharp memory!
Aimé retired from operating his business, Aimé's Auto Parts, at the age of 50 and spent the remaining 43 years enjoying life to the fullest, golfing more games than anyone until late summer 2020, often outplaying people half his age. His pastimes also included gardening, travelling and doting on his grandchildren.
During the last eight years, he resided at 400 Place Desmeurons where he met and fell in love with Edith. Their love and devotion brought joy and wonderment to those around them. They enjoyed the camaraderie of fellow residents playing shuffleboard, cards and making beautiful, bountiful gardens. Throughout the pandemic they enjoyed the support and companionship of Uncle Gerry and Tante Rolande. Forever the rebels!
He enjoyed hearing from nieces and nephews from near and far and treasured their phone calls, letters and Christmas cards. A big thank you to all of you who took the time to do so. He loved you all!
A special thank you to the Hogues, Louis (Louise), Tommy and Emile (Julie) for always having included Aimé in your lives. How he loved to talk with you and join you on outings.
Funeral Mass was held at St. Boniface Cathedral, Winnipeg, Reverend Marcel Carriere presiding, on Friday, March 12, 2021 at 11:00 a.m. Interment followed at the St. Norbert Cemetery.
The family would like to extend their gratitude to his doctors and the staff on Wing 3E at Riverview Health Centre. Your care and compassion were such a comfort to us that it made this difficult time much easier to bear. God bless you all!

Family and friends may sign a
book of condolence online at www.desjardinsfuneralchapel.ca