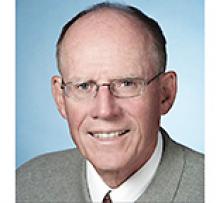 It is with deep sadness that we announce the passing of David Drybrough at the age of 84. He was a loving husband, dad and papa who will be dearly missed by his whole family, and many friends. Dave was born in Winnipeg, Manitoba on October 13, 1936, son of the late John and Edna May Drybrough. On New Year's Eve of 1959, Dave met the love of his life and on August 26, 1961, he married Constance "Connie" Ellis, who survives. To this day, he liked to call her "my bride".
Dave is also survived by son Keith (Kirsten) Drybrough and their children, Julia and Madelaine of Winnipeg; son Daniel (Marjolein) Drybrough of Calgary, AB and their children, Benjamin, Jack and Samuel; and daughter Heather Drybrough and her children, Jane and Isabel Askham of Calgary, AB. He is survived by sister Barbara McKeen of Kelowna, BC and twin brother Donald (Moira) Drybrough of Brampton, ON and their children, Catherine (Mark) Graham, Cynthia (David) Jamieson, Christina Drybrough and Donald (Brenda) Drybrough and many grandnieces and grandnephews. Dave is predeceased by his older brothers, Robert Donald and John David, both passing away many years ago.
Dave grew up in Tuxedo and was a "lifer" at St. John's-Ravenscourt School, graduating in 1953. His love of sport began as a Grade 8 student when he finished second in a school cross-country run. Dave went on to become a top provincial and national distance runner in the 1950s and into the early 1960s. He set several University of Manitoba track records and represented Canada in the 1500-metre final at the Chicago Pan Am Games in 1959. Dave set the Canadian Indoor Mile Record in 1960 with a time of 4:10.4, a record that held for many years. Tall and lanky he played basketball in high school and went on to be Rookie of the Year in the 1959 Manitoba Senior Men's Basketball League.
Dave involved himself in sport throughout his life. He coached the University of Manitoba's 1964 cross-country running team to the Canadian Championship, served as Deputy Meet Director of Athletics at the 1967 Pan Am Games in Winnipeg, and represented the Canadian Track and Field Association as an official at the 1968 Olympics in Mexico City. In 1980 at the age of 43, Dave ran the Manitoba Marathon, crossing the finish line with both arms held high in celebration. In 1985 and 1986, Dave served as technical committee chair for the Manitoba Marathon. In 2009, Dave was inducted into the Manitoba Sports Hall of Fame for his achievements in and contributions to athletics.
Dave was a Fellow Chartered Accountant and enjoyed a long and fulfilling career. After articling at Deloitte, Plender, Haskins & Sells, and then working in industry at Malcom Construction in the early 1970s, he spent 25 years with Coopers & Lybrand (now Pricewaterhouse Coopers). Dave was a Partner with the firm from 1976 until his retirement from public practice in 1997. Dave then joined Winnipeg-based Gendis Inc. as Vice President, Finance until his retirement in January 2004. Through many years, he served on several boards of directors including St. John's-Ravenscourt School.
Dave and his family spent many happy summers at the family cottage in Victoria Beach, Manitoba, where they met and made lifelong friends. An avid tennis player and golfer, Dave was instrumental in expanding the tennis facilities at Victoria Beach in the early 1990s and he was involved in the development of Grand Pines Golf Club, minutes away from Victoria Beach. Right from the beginning when renting on 7th Avenue and then buying the lot and building the cottage on 8th Avenue in 1975, Dave passed on his love of the active cottage life and community to his children and grandchildren. He will be dearly missed on the fairways and at the courts.
Dave and Connie enjoyed winter vacations to Hawaii and countless times with friends (the "wall-nuts") watching sunsets at Nihi Kai on Kauai. They also spent many months a year at their home away from home in Calgary. Since the late 70s, a winter highlight was cheering on the Winnipeg Jets and Manitoba Moose as season ticket holders. Dad was thrilled to see the Jets return to Winnipeg. In the warmer months, Dave and Connie enjoyed evenings together watching the Winnipeg Goldeyes.
A private funeral service will be held at Thomson "In the Park" Funeral Home, 1291 McGillivray Boulevard. A Celebration of Life will take place at a later date.
In lieu of flowers, donations may be made in memory of Dave to the David J. Drybrough '53 Scholarship, c/o St. John's-Ravenscourt School Foundation, 400 South Drive, Winnipeg, MB R3T 3K5, 204.477.2497, or online at www.sjr.mb.ca.