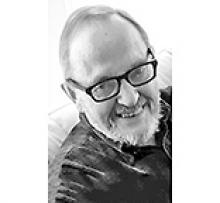 It is with heavy hearts we announce the peaceful and unexpected passing of our treasured Dad, Afi and Brother on March 7, 2021.
Born in Riverton MB, at the Bakka Farm beside the Icelandic River, on May 6, 1938 to parents, Sigurlin (Lena) (Erickson) and Kjartan (Ken) Thorsteinson. He was a kind, calm and stubborn Icelander - fiercely proud of his heritage. Always ready with an interesting story on a variety of topics, which we will forever cherish, and wish we could hear just one more.
Claude attended school in Riverton and Business College in Winnipeg where he resided until retirement in 1998 to Lochwoods, north of Gimli. His working career was as an Administrator at Success Commercial College and later Frontier School Division. He loved the travel portion of his job that took him to many communities in Northern Manitoba.
He was interested in genealogy and became a resource for others researching their Icelandic background. Many times the Icelandic River Saga book was pulled from his bookshelf, along with other well used books.
The cottage (Njardvik) was his bliss. He wood carved, puttered and had wonderful memories there. Erika and Carter will forever remember beachcombing, elaborate bedtime stories, informative nature walks, and time on the deck - Claude with a strong cup of black coffee. Saturday BBQ night with his brother Dick, continued until present.
He moved to the Waterfront Centre in Gimli in 2014. He enjoyed his balcony view, the camaraderie of the coffee group, and term as President of the Tenant Association.
Volunteerism was an important part of his life. Icelandic National League of North America, Gimli Icelandic Canadian Society, Icelandic Canadian Fron, Riverton Transportation & Heritage Museum, Icelandic Festival - Cultural Pavilion. He volunteered at the New Iceland Heritage Museum until he was over 80.
He was a hands on Afi with strong, supportive relationships with each grandchild. Countless hours were spent on the phone - especially in this last trying year. He was simply the best dad a daughter could ever hope for.
Claude is survived by his daughter Signy Thorsteinson, grandchildren Erika Sigurlin Thorsteinson (Michael Black), Carter Johann Thorsteinson, and brother Dick Thorsteinson.

"In the end, we all become stories."
- Margaret Atwood.
You will be immeasurably missed.
Goda nott

A private family service will be held at a later date.
Donations can be made to the Icelandic Heritage Museum or Betel Home Foundation.