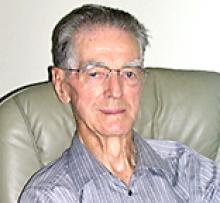 As the result of a stroke at the age of 96, Alex, father of Kathy and Mark, passed away at the Health Sciences Centre in Winnipeg on March 8, 2021.
The fourth, and last surviving, of the eight children born to Robert and Mary (nee Peters) DeGroot, Alex was born in West Kildonan on August 5, 1924. He, his two sisters and five brothers spent the majority of their childhood years in the North Kildonan area. He was a hard worker from a young age and had a strong work ethic. Alex had various jobs until in 1953 he began his employment with CN Rail, retiring in December of 1986. He has often been heard remarking that he "was married to the railway". Working evening shifts was a part of his work life. During these years he used his spare time to construct two homes for his family and pursue hobbies in wood and metal work.
Alex married Catherine Mary Ritchey on February 23, 1946. They resided in Winnipeg until retiring to Sidney, BC in 1990. He and Mary enjoyed travelling to Europe, Hawaii, South Africa and across Canada. During his 34 years of retirement Alex built two houses on Vancouver Island and enjoyed making /fixing things in his work shop. Following Mary's passing in July of 2013 he moved back to Winnipeg and has resided at Thorvaldson Care Centre since June, 2015, where he has received exemplary care. The family would like to thank, nurse Ryann, the administrators and staff of Thorvaldson's for their wonderful care and thoughtful consideration of Alex.
Alex was predeceased by: his wife Mary; his parents; his stepmother Cora; his siblings: Ina (George) Mann, George (Helen) DeGroot, Corrie (Steve) Stelmack, Bob (Dot) DeGroot, Stan (Alma) DeGroot, Norman (Edna) DeGroot, and Charlie DeGroot; his sisters-in-law: Dora (Robert) Gray, Florence (Bill) Savage; and his son-in-law Don MacIver.
He is survived by his children: Kathleen MacIver and Professor Mark (Dr. Jacqui) DeGroot; his grandchildren: Meaghan, Erin (Kyle) and Paul; his step-grandchildren: Brittany, Marion (Edd), John, Rod, Ian, Diane (Hans) and Lorrie (Lori); his great-grandchildren: Juliet, Max, and Jameson; his sister-in-law Judy DeGroot, as well as nieces and nephews, and extended family.
Due to COVID19 restrictions, a celebration of his life will be held at a later date.
In lieu of flowers, those wishing to make a donation in Alex's memory, please consider Friends of Elmwood Cemetery Inc., 88 Hespeler Ave., Winnipeg, MB R2L 0L3 or a charity of your choice.