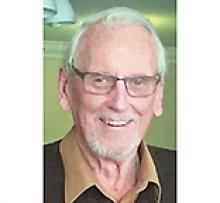 On March 4, 2021, the world lost a really good man with the passing of Kennedy Andrews. While unexpected, his passing was peaceful and capped a life well lived in every sense.
Born on June 10, 1929 to Jessie and John David, Ken was a lifelong Winnipeg resident, making his home in the Riverview area. After graduating from Kelvin High, he went on to study at the University of Manitoba. Ken made many lifelong friends during his time in the Faculty of Commerce and spent two summers working in Philadelphia prior to his graduation in 1951.
Ken went to work at the Great West Life company following graduation and was there for many changes including moving the Actuarial department to computer driven in the early 1960s. It was there he met and married Dorothy McIntosh. Together they built a life that included two children, a love of camping, travel and many other hobbies. The birth of their two grandchildren brought special joy and they loved having them visit a couple of times a week for special adventures. Grandpa Ken was also a favourite of the two young ladies who joined the family with his son's marriage.
Ken's life always included a service component - whether younger years spent with the YMCA at Camp Stephens, supporting his son and other student athletes at Riverview Community Centre or many decades of involvement and leadership with Kiwanis International.
Retirement brought new adventures for Ken and Dot. They travelled to Alaska, the UK and took many driving trips to visit their daughter in the US. They visited Nova Scotia and the Maritimes numerous times to further the genealogical research for which Ken developed a passion. Ken's wife and partner in crime, Dorothy, passed away in 2016 and he moved to the Canoe Club where he found many old friends and neighbours to spend time with.
Ken is survived by his daughter Tannis Causey (Chris), son John (Patti Makinson), and grandchildren, Hannah and David, Samantha and Madelyn Shefchyk, as well as sister-in-law Judy Oliver and nephews, Dale (Stephanie Chow) and Jason (Helen, Maxwell, Victoria and William) Oliver.
As we are unable to gather to celebrate Ken's life at this time, information on a memorial service will be made available at a later time. We have established a memorial site at www.forevermissed.com and invite you to share stories, photos and cherished memories of Ken's life.
In lieu of flowers, please consider a donation in memory of Ken to St. Jude Children's Research Hospital.