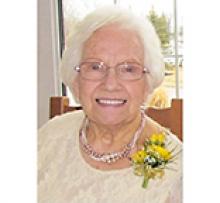 It is with peace and sadness that we announce the passing of Margaret Friesen (nee Harder) at Extendicare Oakview Place in Winnipeg.
Margaret was predeceased by her parents, Anna and Johann Harder; three older sisters (one in infancy), two older brothers, and her eldest daughter Karen.
Margaret is survived by her husband Henry Irwin Friesen, sister Hedie (Jake), sister-in-law Hedy, brother-in-law Rudy (Edith), son-in-law Dan; daughters, Kathy (Fred) and Carol (Stephen); grandchildren, Patrick, Jacqueline, Joshua, Benjamin, and Sydney; and nieces and nephews.
Margaret was born in the RM of Hanover in southern Manitoba on February 8, 1936. She married Irwin on April 18, 1964, in Winnipeg, and they soon moved to Ottawa where Irwin had been working. They moved back to Manitoba in 1965 after their daughter Karen was born and first lived in Winnipeg, then started farming near Rosser in 1969. Daughters, Kathy and Carol arrived in 1967 and 1973. Margaret helped Irwin on the family farm until their retirement in the early 1990s. She became an excellent gardener and lover of wildlife attracted by the various flowers she grew. There was always a bountiful harvest of delicious vegetables and fruit from her garden each year. In later years she greatly anticipated the arrival of hummingbirds to her feeders every summer, and also enjoyed visiting the English Gardens at Assiniboine Park in Winnipeg with Irwin, to spot a hummingbird or two. Margaret was gifted with a natural musical ability, learning to play by ear at a young age on a pump organ that her family had at home. She then played the daily national anthem on the piano at George Herbert school, a one room school that she attended when her parents moved to the Pigeon Lake area in the RM of St. Francois Xavier. Margaret was a very creative person, displaying great skill in the sewing, knitting, crocheting, and quilting of numerous items for her family. She also endeavoured to achieve her high school equivalency through the completion of the General Educational Development (GED) test later in life, which she was very proud of. She passed this love of nature, music, and lifelong learning on to her children.
Margaret was a member of the Charleswood Mennonite Church in Winnipeg and attended services with Irwin until her health prevented her from doing so. Her faith was a very important part of her life.
Mom moved into Oakview Place in early March last year due to her declining health, just before the pandemic-related lockdowns started, so none of us knew at the time what challenges lay ahead of us. The family expresses their heartfelt thanks and gratitude to all the hardworking and dedicated staff at Oakview for their kindness and compassionate care for Mom over the past year. We also thank the staff at Sturgeon Creek Retirement Residence 1, for their kind and generous assistance with Mom before moving to Oakview.
In accordance with family wishes a private service will be held at Chapel Lawn in Winnipeg.
In lieu of flowers, please consider a donation to the Alzheimer Society of Manitoba or to Canada's Diversity Gardens through the Assiniboine Park Conservancy.