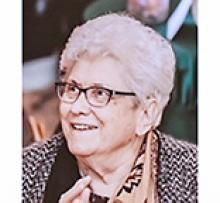 When our Mother died a year ago, COVID was new and we thought it would be a few weeks before we could gather together to celebrate her life and mourn our loss. A lot has changed but it's still not the right time to get together.
Mom was born on the farm in Monominto in 1928 to Dan and Anastasia Kruchak, the 8th of 11 children. There was always work to be done and she left school at an early age to help out in the house, barn and fields. She was a southpaw who was forced to use her right hand at school resulting in her being ambidextrous and having beautiful handwriting with either hand.
As a young woman, Mom played competitive ball in Ontario and in Winnipeg with the St. Vital/West Kildonan Tigerettes who won the Senior Girls championship in 1949, 1950, 1952 and 1954. Mom was frequently mentioned in Free Press clippings: "...lusty hitting by Olga Kruchak", "Kruchak clubbed a single, double and triple in four appearances, driving in four runs" are two examples. In 2004 we proudly watched Mom on stage as the team was inducted into the Manitoba Softball Hall of Fame.
Mom was a strong, capable role model, blessed with practical sense as well as a creative side. She could take apart and fix a TV or radio or do beautiful sewing and needlework. She was an early believer in natural healing and preventive health measures long before it became trendy. An excellent cook, Mom made all the traditional Ukrainian foods plus embraced new recipes and ethnic cuisines very early on. In 1970 when Danny's class at Central South put together a cookbook, he submitted Mom's recipe for Sukiyaki. Wonder how many families tried that one! A devoted gardener, she loved autumn - harvesting and preparing fresh produce, freezing and canning, always generously sharing with family.
Granddaughters, Tannis and Jenna, were her pride and joy. She was always ready to drive, fly or take a bus to Regina to visit, happily spending hours playing board games and cards with the girls. Many mornings she would get up early to have fresh perogies ready when they came home for lunch. She was excited to welcome her first great-grandchild, Lexia, but, sadly, didn't live to meet great-grandson, Kaden.
Over the years Mom had many challenging, non-traditional jobs - store detective, electronics welder, but hit her stride when she began selling: Lund's Lights, Melaleuca, Raleigh Golden Pride, Jewelway, NSA.
Mom and Dad moved to Whittier Avenue West in Transcona in 1968, home until she relocated to Devonshire House in 2009, three years after Dad's death. Although meals were provided daily in their bright, cheery dining room, she often did her own cooking right up until the last months of her life. She loved cooking shows and Danny frequently made grocery runs so she could make a favourite dish or try one of the TV chef's recipes. Building staff said they knew that Olga was cooking if something smelled delicious on the 4th floor.
Mom was hospitalized in January, 2020 and was devastated in mid-March when she realized she would no longer be able to live on her own. She passed away on March 24, 2020 at the age of 91, right at the onset of the COVID pandemic. Thank you, Mom, for the kindness, love, humour and unfailing support you gave your family and for being such a wonderful role model. You are missed every day and will always live in our hearts and cherished memories.
Survived by son Daniel, daughter Karen Mondor (Lorne Pavelick), granddaughters, Tannis Hensen (Mark Schmidt), Jenna Mondor (Mike Kuzmickas), great-grandchildren, Lexia and Kaden, sisters, Stella Harlow, Betty Johnstone, brother Joe (Madeline) Kruchak and many nieces and nephews. Predeceased by husband Jack, parents, Dan and Anastasia Kruchak, sisters, Helen (Rudolph) Koskie, Mary Wright; brothers, Willy (Polly), Johnny (Josie), Roman (Verna), Mike (Gladys), Paul (Fern); brothers-in-law, Bob Harlow and Dave Johnstone, and sister-in-law Olga Tokar (Steve).