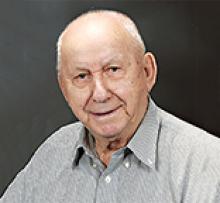 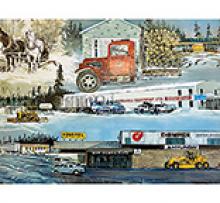 It is with heavy hearts we announce the peaceful passing of our father, Michel (Mike) Querel, on March 12, 2021, at the age of 95, with his family by his side, after surgery and a brief stay in the hospital.
Left to cherish his memory is Lucille, his wife of 72 years.
He will be mourned by his children, Kenneth (Joanne), Robert (Diane), Janice (Jack Herrod) and Donna (Blaine Gysler). He also leaves eight grandchildren, Trevor, Kristen, Richard, Denise, Jordan, Joel, Kyle and Kevin; and 18 great-grandchildren.
He is survived by his brother Denis (Rita); also brother-in-law Ray Guilbault (Louise), sister-in-law Simonne Hayward (Dennis), and numerous nieces and nephews.
He is predeceased by his infant sister Denise, and two older brothers, Gus (Marie), and Gaston (Therese); sister-in-law Irene, Guilbault (Carl), brother-in-law Lucien, brother-in-law Armand (Jean), and brother-in-law Roger (Millie).
Dad was born in Badger, Manitoba in 1925 to Aristide Querel and Ozelie (Gauthier). Mike and Lucille were married November 27, 1948. Dad and Mom lived in a two room house in Woodridge, Manitoba where they raised their four children. In 1975 they moved to Winnipeg where they resided until now.
During Dad's long career he owned and operated Querel Construction and Querel Gravel and Lumber, employing numerous people.
He started in the logging industry in the Woodridge area with his father and brothers using a team of horses that he purchased in 1944 and over time the horses were replaced with his first truck in the late 40s.
In the 1950s he had a winter sawmill operation located in Woodridge where he sawed black poplar used for sewer cribbing in the Winnipeg area. During the summer seasons he did numerous major road construction projects in Manitoba.
In the 60s he got a contract to build a highway in Hudson Bay, Saskatchewan. As a result he acquired a logging contract with Simpson Timber in Hudson Bay, lasting 40 years. In those years he logged thousands of cords of wood. While operating his business in Saskatchewan his work ethic led to a logging contract with Ontario Minnesota Pulp and Paper in Kenora, Ontario, where the operation flourished and expanded into road building as well. In 1986 he built a shop, Woodlands Equipment in Kenora, used in the service and maintenance of trucking and logging equipment for his entire operations.
In 1992 he purchased the Fiat Allis dealership in Winnipeg which became Querel Equipment selling and servicing Champion Graders, Hyundai, Thomas and Kabota Equipment.
In the midst of running all these companies one of his hobbies was raising cattle on farm land he purchased in the St. Labre, Manitoba area. This hobby eventually lead to a large herd of bison that continued until he sold the farm in 2014.
Dad appreciated and respected the many employees he had and business acquaintances he made throughout the years. In the early years between contract jobs, he sought out opportunities to keep his employees working. Dad also said because he loved what he did for a living, he never worked a day in his life. Dad retired his businesses in 2006.
He was a member of the Canadian Bison Association and a Royal Canadian Legion member. He was also an avid Wrestling and UFC fan.
In his retirement Dad and Mom enjoyed "chasing" Fall Suppers, going to auctions and going for drives throughout the area. Summers were spent touring the yard in his golf cart enjoying his flowers and garden. One of his greatest joys was walking out to the garden to pick fresh tomatoes and cucumbers wanting the bragging rights of having the first red tomato of the season. He got pleasure in sharing his enormous garden with family, friends and neighbours. Because of his generous nature, their home was always open to family and numerous friends for meals, coffee and lively conversation. Many people looked forward to his summer BBQs.
Dad had a quiet demeanor, but he had a large personality. After his retirement, Dad had time to appreciate and value family life. Dad gave us tenacity and a good work ethic. (And maybe a tiny bit of stubbornness). These qualities have served us well throughout our lives. We are going to miss hearing the "Dadisms" - You Betcha, I'm 100 percent, I'm a Soup Man, Are You Crazy? or Oh Ya.
Due to the Covid pandemic restrictions limiting gatherings to 10 people, we regret that we will not be having the large life celebration for Dad we had hoped to. Therefore a small family memorial will be held.
Thank you to all our family and friends who have supported us throughout this difficult period with comforting words, food, flowers and cards.
We realize that Covid has been difficult for many families, therefore we has chosen the Winnipeg Food Bank for donations in Dad's memory.