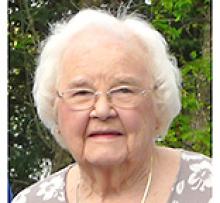 It is with great sadness we announce the passing of our mother peacefully in her sleep on March 4, 2021, just days short of her 100th birthday.
She is predeceased by her husband Lloyd of 50 years. She is survived by daughter Ann (Tom) Downey and grandchildren, Eva and Brian; and son John (Robin) and grandchildren, Ross and Kelly, of Prince George.
Jean lived in Rochanville, Saskatchewan until the age of nine when her family moved to West Kildonan. Jean enjoyed school and following grade 11 she enrolled in the Faculty of Commerce. Jean left university when the Second World War broke out and took a job at the Bank of Montreal main branch where she worked until she and Lloyd married in 1946. She loved her work there and spoke often the various positions she held.
Jean and Lloyd lived in Norwood for over 40 years, and built the family cottage on Lake of the Woods in 1963. Jean enjoyed her summers at the lake with the kids and then the extended time they spent there once Lloyd retired.
Jean loved to travel. She and Lloyd spent 21 winters in Hawaii and highlights were their 40th anniversary trip to Australia and New Zealand and her trips to Washington, DC with John and to New York City with Ann. Jean was an avid crafter, sewing most of her own clothes, and she always had a knitting, crocheting and/or quilting project on the go.
Jean got her first car for Christmas 1964 and she continued to drive until her early 90s. It gave her a real sense of freedom and it also enabled her to volunteer for the CNIB, driving people to weekly get togethers, where she would record textbooks for blind students while she waited. Jean coordinated the canvassers in Norwood for the Salvation Army, but her favourite volunteer work was stuffing envelopes for the Humane Society, always with a dog beside her for company.
We wish to give our heartfelt thanks to the staff at Actionmarguerite Saint-Boniface who cared for her with great compassion during the COVID pandemic and during her final days.
In keeping with Jean's wishes cremation has taken place. A small family memorial will take place at a later date.
Donations in Jean's memory can be made to the Winnipeg Humane Society or a charity of your choice.