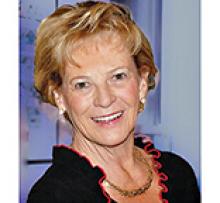 Els Kavanagh, still vibrant and full of charm and wit, passed away suddenly on March 10, 2021, in Naples, Florida.
Els was born in Amsterdam and moved to Winnipeg in 1954 along with her family, leaving behind a war-torn country for a chance at a better life. She arrived in Canada with her mother, Elisabeth Maria (Bep), her father, Willibrodus Josef (Willi), and her two younger brothers, Hubert and Harry. At just 16 years old Els started working full-time to help the family get through those early years. Starting afresh she honed her skill of looking forward and remaining endlessly positive. She plunged into life in Canada, which included mastering the English language to perfection.
There were exciting days ahead in Winnipeg for Els as a member of The Winnipeg Badminton Club and the Winnipeg Canoe Club, where she won trophies and was considered for the Olympic canoeing team. It was at the courts of the badminton club where she was pursued and charmed by Kevin Kavanagh. Their marriage in 1963 launched the beginning of a formidable team. The affection they had for each other lit every room they entered.
Together they raised their family in Winnipeg and in Denver and spent amazing times with friends and family at Lake of the Woods and Naples, Florida. She imparted to her children, Sean and Jennifer and then to her grandsons, her strong values of family, learning, humour, and perseverance. All guided by her strong Catholic faith.
Els was intellectually curious and informed on many locally and international topics. Her bookcases were not for show and were filled with everything from politics, art and philosophy to the latest thrillers. She listened intently to others, hoping to understand various viewpoints.
She was an active and relentless supporter of dozens of organizations, including sitting on the boards of the Manitoba Arts Council, St. Boniface Hospital, the Royal Winnipeg Ballet, the Manitoba Historical Society, The Catholic Foundation of Manitoba, St. Paul's High School, the Canadian Museum of Nature and CARE Canada. In Naples, she found inspiration and friendships through her participation with the Greater Naples Leadership and Naples Council on World Affairs lecture series. Els worked passionately interviewing families for Habitat for Humanity, helping people achieve the dream of having a home.
While Els pursued many interests, what meant the most was her family. She gave unwavering love, friendship, support and contributions to the successes of Kevin, her children and her grandchildren.
Just last week, Els played golf, swam every day, edited two of her grandson's university papers, attended mass virtually, participated in numerous ZOOM lectures and watched her beloved Winnipeg Symphony Orchestra perform. There is so much to say about Elisabeth Maria Kavanagh, affectionately known as 'The Bunny', but most of all, she was an example of how to truly live life to the fullest.
The immeasurable effect Els had on her family, friends, and community will continue to be felt by her son, Sean (Melissa Ridgen), her daughter, Jennifer (Hugh Moncrieff), and her grandchildren, Will and John Moncrieff. She will also be missed by her brothers, Hubert (Renee) and Harry, and her family members in Holland especially her cousin Thea Muller and the Bennett families in France. A very special thank you to Suzie Lount, Carole Abbott and Renee Quinn for all of their love and assistance this past week.
In lieu of flowers, donations can gratefully be made to Gonzaga Middle School, St. Paul's High School or the Winnipeg Symphony Orchestra.
A private family service will be held.