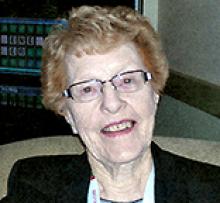 Peacefully, Jean (Christena) Charles (nee Donald), aged 97, passed away on Thursday, March 18, 2021.
She will be fondly remembered by daughter Brenda, husband Joe Globa; son Stuart, wife Heather; granddaughters, Ashley (Jeremy), Katlin (Dave), Meghan (Eric) and Nyssa (Matt); and great-grandchildren, Gwenyth, Ivey, McKenna, Hunter, Grace and Juliette. She was predeceased by her husband Jack in 2004.
Jean was born on the family farm near Pipestone on January 16, 1924, the youngest of seven children. She moved to Brandon in 1947 to work at the Bank of Montreal after graduating from grade 12 and working at the Bank of Montreal in Reston. Like many young singles coming off the farm she stayed at the YWCA. It was in Brandon she met Jack Charles, who was stationed at Shilo, at a hostess dance. They were married on November 12, 1949. As the wife of an army man Jean moved many times having lived in Shilo, Winnipeg (numerous times), Toronto (ON), St. Catharines (ON), Hemer (Germany), Oakville (ON), and Brussels (Belgium). Jack and Jean remained in Winnipeg when Jack retired from the army in 1970 where they lived on Highcliff Bay for many years. In her later years Jean enjoyed watching Lawrence Welk and listening to her CDs.
The family would like to thank the staff of Golden West Centennial Lodge, Brenda Reznik, and a special thanks to Major Brenda Coles.
No formal service will be held and interment will take place at a later date in Reston, MB.
In lieu of flowers, donations would be appreciated to Golden West Centennial Lodge, 811 School Rd, Winnipeg, MB R2Y 0S8.