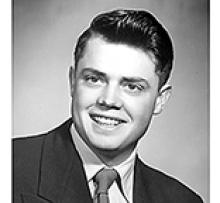 After a long battle with cancer, Herbert Coleman Driver passed away peacefully on Tuesday, March 16, 2021 at home in Winnipeg. He was 89 years old.
He is survived by his daughter, Tara (Finn) Johnson of Winnipeg, his grandchildren, Pauline, Kieran and Veronica Johnson of Winnipeg, his brother-in-law Andy Stevens of Portage la Prairie, and sister-in-law Lynn Stevens (née Andres) of Winnipeg. He is predeceased by his beloved wife Norma Driver (née Stevens), parents, Joe and Myra (née Tickle) Driver, and brother-in-law Don Stevens.
Herb was born in Portage la Prairie and grew up on a farm north of Portage. He attended West Prospect School, Portage Collegiate in St. Mary's Parish Hall, and the University of Manitoba. He married Norma Stevens in 1963 and they moved to Ames, Iowa where Dad achieved his PhD from Iowa State University. They moved to Winnipeg, where their daughter Tara was born, and then settled in Guelph, Ontario where Herb was a professor of agricultural economics at the University of Guelph for 18 years. In 1988, Herb took early retirement and he and Norma came home to Portage la Prairie to farm. It was a big adjustment, but Herb got to fulfill his dream of being a farmer. Herb and Norma retired from farming in 2001, and moved to Winnipeg in 2011 to be closer to their family. Norma's passing in 2018 was heartbreaking, but Herb and Norma are now together in Heaven with God, having believed in salvation through Jesus Christ.
Viewing and slideshow will take place at McKenzies Portage Funeral Chapel on Sunday, March 21, 2021 from 1:30 p.m. to 3:00 p.m. Interment will follow at Prospect Cemetery. Virtual service will be viewable on Herb's obituary page at www.mckenziesportagefuneralchapel.com once available.
If friends so desire, donations in memory of Herb may be made to CancerCare Manitoba, 1160-675 McDermot Avenue, Winnipeg, MB R3E 0V9.