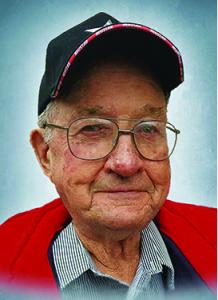 TOPP: Robert (Bob). It is with great sadness that we announce the passing of our beloved husband, dad, grandpa and great grandpa. Bob passed away peacefully with family by his side on March 8, 2021. Bob was born on September 28, 1927 on the family farm near Rapid City to George and Christina Topp. He went to Oakleigh School. It was while working with Manitoba Hydro in Glenboro, he met the love of his life Alice Bardarson. They were married on June 4, 1949 and shared over 64 years together. From this union, they were blessed with 2 children, son Bob born in 1950 and daughter Norma born 1953. Bob worked at Manitoba Hydro, then Hill the Mover, following this he began his milk route at Modern Dairies travelling to Virden and many other towns in the countryside. He loved this job for thirty plus years. He was never happier when his grandchildren would spend a day on the milk truck with Gramps. Mom and Dad bought an acreage southwest of Brandon in the 70's. Dad bought his Ford tractor. Many hours were spent on the tractor doing yard work. His favourite thing was to haul his grandchildren and great grandchildren around. There isn't many of the grandchildren who weren't taught how to drive the tractor. Camping was also enjoyed by Mom and Dad. They travelled all through Canada and lots of the US. Sometimes on their own, other times with a grandchild or two with them. There were also many a Sunday drives checking out the countryside and casinos. Another past time was helping out his neighbour across the road, Doug Troop at harvest time. To him it wasn't work it was time enjoyed outside and visits with Doug. Dad's motto in life was to not sit around, keep busy, keep moving. At 91, with the help of his 2 grandsons getting him in the boat he went for a cruise around Pelican Lake enjoying the sights. Dad was out every day on the shuttle from Victoria Landing or with his family, never turning down an invitation to go out. He had spent the last 16 months in the Assiniboine Centre. He had only moved to Fairview for a month when he decided it was time to be with his beloved Alice. They are together now, doing what they love, watching over their family. Bob is survived by his children, son, Bob (Sandra); daughter, Norma Roziere; his many grandchildren and great grandchildren and sister, Jean Lindsey. He was predeceased by his beloved wife, Alice; son-in-law, Norman Roziere; his parents, George and Christina Topp; brothers, George, Jack, Doug and sister, Gertie. A celebration of Bobs life will be held at a later when we can all get together to celebrate the life he lived.

Memories of those we love live forever in our hearts.
Messages of condolence
may be placed at
www.brockiedonovan.com