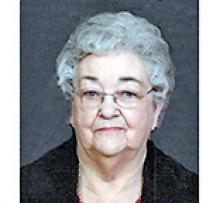 Peacefully, with her daughters by her side, Mum passed away on Wednesday, March 17, 2021, at nearly 92 years of age. It's befitting that she left us on a day that is often associated with luck, as we feel so fortunate to have had her with us for so many years.
Left to mourn her passing are daughters, Heather Zawadowski and Janet (Gerald) Andrews; granddaughters, Jenn (Eric) Johannson, Lisa (Matt) Prefontaine, Erica (Dustin) Vogt, and Courtney Zawadowski; great-grandchildren, Adalynn and Weston Johannson, Scarlett and Emmett Prefontaine, and Thatcher and Stella Vogt; and brothers, Jack and Lorne Gardner.
Mum was predeceased by son Brian (1971), husband Ewen (1974), and son-in-law Rolf (2007), as well as two brothers and two sisters.
She was born March 23, 1929 in Roblin, MB and married Dad in 1951. Together they welcomed three children in the years that followed. She resided in Winnipeg for most of her life and was a longstanding member of St. Saviour's Anglican Church.
Mum loved spending time with her family and friends. Her grandchildren were her pride and joy and she could be found at every dance recital, band concert and soccer game, cheering on her girls. In the past few years, welcoming six great-grandchildren brought her even more joy. She will be dearly missed by all who loved her.
Our family extends gratitude to Dr. K. Harris and Mum's Palliative Care providers.
In lieu of flowers, donations in her memory can be made to the Arthritis Society's Prairie Division or a charity of your choice.
Interment will take place at Tummel Cemetery this summer.