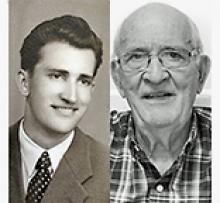 While living independently until days from his passing, and after a decline in his physical health, Antonio Gomes peacefully passed away from old age at Seven Oaks Hospital with family by his side.
Antonio was predeceased by his first wife Luzia Gomes (1965) as she brought his sons into the world. He is lovingly remembered by his wife Maria Gomes; children, Carlos (Julia), John (Lori), Fernanda (Rob); and granddaughters, Suzanne, Rebecca and Lauren. He is survived by a brother and sister in Portugal and a very large extended family and many friends in Europe and Canada from Toronto to Victoria.
Antonio was born in Casais Martanes, Portugal on September 23, 1932, he worked at Renova paper plant as a production manager before immigrating to Canada in 1967. He frequently expressed how he was eternally grateful to family members in both Toronto and then Winnipeg who encouraged and then helped him settle in Canada. He became a Canadian citizen and couldn't say enough about the opportunities this country provided for him and his family for a better life. He enjoyed recounting his varied employment experiences working as a picker on a nightcrawler worm farm, and harvesting tobacco leaves in Ontario as well as helping build Canada's railroads out West and hydroelectric dams up North. He was however particularly proud of his expertise in cement finishing which formed a large part of his construction career to retirement.
Antonio was very proud of his Portuguese heritage and loved teaching his granddaughters the Language and telling stories, some of his best memories were spending time with the girls at the beach and showing them the sights and sounds of his homeland. His early roots working in agriculture in Portugal right out of school, left him with a love for gardening. He would show off his harvest in the fall holding up huge tomatoes, and almost foot long green beans.
As per covid-19 guidelines, a private funeral has been held.
In lieu of flowers, please make donations to your preferred charities.