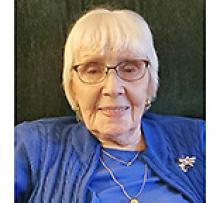 It is with great sadness that the family of Therese M. Beach announces her passing on March 20, 2021, at the age of 96 years.
Predeceased by her loving husband of 62 years, Wilfred Beach, Terry will be lovingly remembered by her son Keith and daughter Beverley (James) Pierson; her grandchildren, Lara Johnson and Christopher (Kristin) Beach; and great-grandchildren, Van and Annie Beach. She is also survived by her brother Richard (Cathy) Poitras, sister Cyria Lawn, and many nieces and nephews.
Born to Arthur and Eliza Poitras in Woodridge, Manitoba on September 16, 1924, Therese was a talented art student until she left school to join the Grey Nuns of St. Boniface. She joined the Army in 1943, and served for 37 months repairing and packing parachutes for the troops before retiring at the time of demobilization. She was known as "The Parachute Packing Princess" in the newspapers of the time. Later, with her husband in the Army, she lived in numerous locations in Canada and Germany, finally settled in Winnipeg.