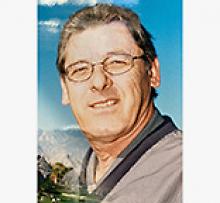 Bill Moroz passed quickly, with family right by his side.
He is survived by his loving children, Craig and Stephanie; his sisters, Marilyn and Iris; granddaughter Susie, nieces and nephews, and by numerous wonderful cousins and friends. He was predeceased by his wife, Susanne (Owens), and his mother, Elsie.
This sudden loss leaves a huge void. Bill was a big force, as a big brother, as a father, as an inspiration. His humour, charisma, intelligence, knowledge and speaking ability were unmatched. A born story-teller, these gifts shone in conversation.
Bill became a father-figure to his two young sisters at the age of 10. He was a bakery boy, a barbershop boy, and a newspaper delivery boy; his work ethic was innate. Bill--Billy, to his close family and friends--pursued studies in science and math at the University of Manitoba, later landing a job as a pharmaceutical rep. He worked for Parke Davis for 30 years, ending his career with Abbott labs and several other companies as the "mat leave" guy.
Bill enjoyed watching hockey and football, especially with his son Craig. He enjoyed playing golf and kept up to date with every important news story. His daughter Stephanie, would often check in with dad, just to get the latest scoop--he just always knew! His last years, lived with his sister Marilyn were supportive, kind and close-knit. His joy in his granddaughter was evident always, whether he was participating in the activities of a busy six-year-old or sneaking her candies. A dog father as well, Bill was the best owner to first Maisie, and now Luke, who will join us in missing him immensely. His pride and joy in his children sustained him and them. Politically savvy, intelligent, and kind, Bill will be remembered as a wonderful father and friend.
A celebration of his life will be held at a future date.