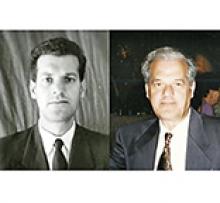 It is with heavy hearts that we announce the passing of our beloved husband, father, grandfather, brother, uncle, and friend, after a brief illness.
His memory will live on forever in the hearts of his loving family - his beloved wife Maria Amelia; daughter Maria Alice (Laurindo); grandchildren, Ryan (Yolanda), Megan (Rory); sister-in-law Alice and brother-in-law Duartino. Manuel's memory will also be cherished by numerous nieces and nephews in the Azores.
Manuel was born in Pico, Azores on May 10, 1935 to parents, Teofilo Maciel and Maria Augusta da Silveira. He was a gifted athlete and especially loved the game of soccer where he played the goalie position. He married his soulmate Maria Amelia in 1959 and soon after a daughter was born. They immigrated to Canada with the sponsorship help of his sister-in-law Alice and husband Duartino. They arrived in Winnipeg in 1963 on a frigid January day. He was a skilled carpenter and quickly found employment in his new country. Later on he worked at the Holiday Inn downtown in maintenance and then went on to become the maintenance manager at the Holiday Inn on Portage until his retirement at age 65. During his working years he made many good friends and these friendships continued on in his retirement years. He was always eager to meet up with a friend for lunch, a chat on the phone, or a hockey game.
Manuel's pride and joy were his grandchildren. He never missed going to one of their school concerts or tournaments. He was always there for them whenever he was needed. He even learned to play golf in his senior years in order to join his grandson on the golf course. He was always eager to help family or friends with his remarkable skills of being able to fix or build anything. His garden always had the best tomatoes and the most beautiful flowers; his hands were never idle. We were blessed to have him with us for so many years.
Due to Covid restrictions, a private family visitation will be held on March 30, followed by a Funeral Mass on March 31.
Flowers are gratefully declined. Instead a donation may be made to Manitoba CancerCare or charity of your choice.