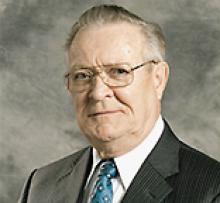 Dietrich (Dick) Krahn passed away on March 28, 2021, at St. Boniface General Hospital at the age of 90 years.
He is survived by his wife of 65 years, Erika; son Anthony (Cheryl) and daughter Andrea (Helmut); grandchildren, Jessie, Nolan, Shaelyn (Joshua), Daria, and his sister Helene Janzen. He was predeceased by his parents, Anton and Helene Krahn and sisters, Nettie Krahn and Catherine Tiessen.
Dick was born in Osterwick, Ukraine on March 19, 1931. His childhood was spent in Europe in refuge during the Second World War. He immigrated to Canada at age 17 years with his family where they settled in Winnipeg.
Dick married Erika Neufeld on July 23, 1955. Anthony was born in 1961, followed by Andrea in 1965. Although Dick received minimal formal education, he was employed in various industries including construction, welding, and sales in the electronic parts industry. He also stated many times he had a PhD in living.
Due to multiple complex medical conditions, Dick was admitted to hospital on March 4, 2021.
Thank you to the staff on 4E at St. Boniface General Hospital for their kind and compassionate care. Thank you also to Dick's medical team, Dr. Martin, Dr. Man, Dr. Dao and Dr. Walters.
Funeral service will be held at Friends Funeral Service, 2146 Main Street on Thursday, April 1, 2021 at 10:30 a.m. by invitation only due to COVID-19.
The service will be live-streamed and can be viewed at the following address: http://www.livememorialservices.com/Home/ServiceDetail/11990
In lieu of flowers, donations can be made to Mennonite Central Committee, 134 Plaza Dr., Winnipeg, Manitoba, R3T 5K9.