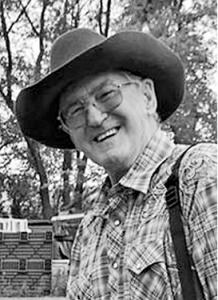 EWEN: On Sunday, March 21, 2021 at the age of 75, Thomas Earl Ewen, AKA "Cowboy" passed suddenly yet expectedly, while being shot in the back by a jealous husband! Or did he? He always had a knack for exaggerating his stories! Dad was an outspoken, opinionated Cowboy that had a penchant of throwing in a certain four letter word while talking or retelling one of his many stories. If you have ever been on the receiving end, you can bet that likely some of it has been a bit inflated. Every story got just a bit better with every retell. He never missed Friday Night Smackdown or Monday night Raw with a tall glass of rum. He thought nothing of jumping on the quad with one of his grandkids and returning dripping wet covered in mud. For as loud as Dad was, he enjoyed his quiet times watching the sunset or waking up early to watch the sunrise or just driving the backroads in Big Red. Dad lived a full life as a devoted father, instilling strong values in his daughters that they have carried with them throughout their lives. Dad led by example and taught us all that it's never too late to make changes in your life. At 48 years old, after 25 years, he hung up his mining helmet, closed up his mechanics shop, and headed back to high school to get his diploma. We remember as children feeling such pride and admiration watching him walk up on stage with the whole grad class cheering for him! Shortly after his graduation he packed us up and moved us from Thompson down to Carroll, MB where he was able to fulfill his lifelong dream of owning his own farm. Dad was a typical hobby farmer and had a huge passion for hunting! In fact, he has been locally sourcing his food for decades long before it was the "in thing" to do. He loved all food! Except cabbage! Wouldn't touch the stuff! But that 3 year expired bottle of ranch dressing in his cupboard, he would use that! "It's still sealed. I can use it once!" That container of year old sour cream in the fridge, "Sour is in the name!" We often heard "It smells good so it must be good" Dad never wasted anything. It either went to the compost, the cows, or to his herd of farm cats. Dad took fashion advice from no one. You'd often find him in an oversized pair of jeans with his signature "Tom" belt buckle and his dad's pocket knife tucked gently in one of the pockets. You'd rarely see him without his cowboy hat with the biggest feather band he could find and his 40 year old cowboy boots on his feet! He was the type of man who would give you the shirt off his back. Although, you may not want it! He's been wearing the same one since the early 80's because "It still fits!" There are so many things to say and ways for us to tell Dad's story. When we recently asked him, the answer we got was "Oh, what a ride!" Cowboy was predeceased by this parents Albert and Nina, his big brother Robert and his cherished daughter Amanda (Gerry Oliver). Left behind to go through his huge pile of stuff that no one has any clue where it all came from or what to do with it all, are his four overwhelmed daughters Catherine St. Louis, Tammy McDougald (Duncan), Tina Erikson (Nathan), Nina Douglas (Nate) and Gerry Oliver (Tracy), the son he always wanted. Also left to celebrate the Cowboy's life are his 19 grandchildren, his great grandchild, nieces and nephews and many other friends and relatives. Dad's unique personality and big heart will be very missed and well-remembered. Due to Covid-19 restrictions a celebration of Dad's life will be held at a later date. In lieu of flowers, donations can be made to the local 4-H club or a charity of your choice.