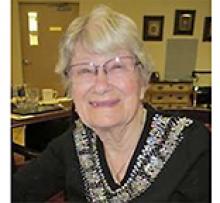 On March 26, Else went to her room for an afternoon nap and slipped away peacefully to be with the angels.
Else was born on a beautiful Easter Sunday to Jacob and Helene Dyck in Chortitza, Russia. Her five older siblings often spoke of their dismay at having to postpone the Easter egg hunt.
War broke the family apart, and in 1943, 13 year old Else fled to Germany from the advancing Russian army with her mother, grandmother and two sisters. Only four of the six siblings and their mother were eventually able to get safely to Winnipeg, Canada in 1951.
In 1953, Else married Gerhard Wieler and had three children, Elenore, Hannah and Richard. Else always made her home a beautiful, welcoming place, even as she worked at Economy Textiles, later Hudson's Bay and attended night school to upgrade the education she missed during the refugee years. She was a dynamo who needed very little sleep.
Else was a devoted Christian, baptised in Germany in 1944, member of First Mennonite Church in Winnipeg for over 40 years and then Coaldale Mennonite Church until her passing. She had a personal relationship with God and spoke as if they were close friends.
In 1992, she married Wilhelm Duda and moved to Coaldale, AB. There she was able to achieve her dream of creating a rose garden like the one from her childhood home. She and Willi enjoyed their retirement years with travel, gardening and entertaining. They were generous hosts and loved touring guests to the mountains and surrounding lakes.
After Willi's death, Mom decided she needed more help and moved to The View in Lethbridge. She was very happy there and made many friends. The staff cared for her with kindness, as did the wonderful group of ladies from Homecare.
Her last months were spent in The Good Samaritan Park Meadows. The staff there not only took good care of her, but quickly grew to love her. Else took joy in her small room surrounded by her dearest possessions as well as the company of nine other ladies in her 'cottage'. All our telephone visits and video chats were full of love and pleasant reminiscing.
Else survived war, the refugee flight from Russia to Germany, the loss of a kidney to cancer and the death of both husbands. She was a strong and brave woman. As sad as we are to lose her, we are comforted by the gentleness of her passing.
Else is survived by her three children, Elenore Wieler (Roland Patenaude), Hannah Schoenfeld (David) and Richard Wieler; four grandchildren, Noel Patenaude (Victoria), Hope Pregno (Dan), Haley Schoenfeld and Brianne Wieler and great-granddaughters, Jasmin, Ella and Jaden Patenaude, as well as stepsons, Hans (Jean), Wally (Karen) and George (Kathy) Duda and step daughter-in-law Kathi Solomon Duda; the Duda grandchildren, Cindy, Sheri, Shawna, Shayne, Shannon, Jason, Robin, Tori, Brad, Daryl, Bryson, Joel and Elise; 27 great-grandchildren; 14 great-great-grandchildren and many nieces and nephews across Canada and the US, as well as Germany.
A zoom service to honour Else's memory will be held on Tuesday, April 20, 2021 at 1:00 p.m. pacific time. If you would like to participate, please send a note to firstunited@telus.net for the zoom link and details.

Visit www.mbfunerals.com
to send a condolence.