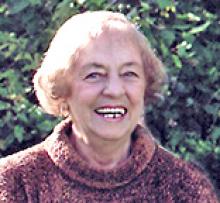 Olga was born on March 29, 1931. She passed away at St Boniface Hospital on March 26, 2021, three days before her 90th birthday.
She was predeceased by her husband of 63 years, Walter, her mother Anna Loyuk, and her sister-in-law Olga Fyfe. She is survived by her son David and wife Rosanne, grandchildren, Daniella and Joshua, sister-in-law Shirley O'Neil, brother-in-law Jack O'Neil, nephew John (Melodee) with daughters, Lacee and Larissa O'Neil, nieces, Liz (Glen) Lawryk and Laureen O'Neil.
Olga spent her early childhood in the Point Douglas area of Winnipeg, before moving to Red Lake, Ontario, where her stepfather worked in the gold mine. There were no roads into the Red Lake at that time, so life was very simple and isolated for the residents of the town. After a few years, her family moved back to Winnipeg. They lived across the street from St. John's High School on Machray Avenue, and she graduated from St. John's in 1949. Soon after, she got a job working at Eaton's, in the accounting department.
Olga met her future husband (and love of her life) Walter Stackiw at her own 19th birthday party in 1950, when one of her friends thought it would be a good idea to invite some neighbourhood boys to liven up the party. After a five-year courtship, Walter was faced with a pivotal decision when he was offered a job in Toronto, doing research at the Hospital for Sick Children. They got engaged, and Walter went on ahead to Toronto to find an apartment and set up their home base. After a few months he returned to Winnipeg so they could be married. On June 11, 1955 Walter and Olga were married at Saints Vladimir and Olga Cathedral, and lived in Toronto for the next two years. While there, Olga was able to transfer to a similar job at Eaton's. They returned to Winnipeg in 1957 when Walter was offered a job by Dr. JC Wilt to work directly with him in the virology department at the University of Manitoba, Health Sciences Centre (HSC). Olga worked at Eaton's in Winnipeg until 1967. They lived in the Medical Centre apartments beside HSC, until they were able to save enough money and build their dream home in East Kildonan in 1960. Their home backed onto Rossmere Golf Course and bordered a small park. To them, it was paradise. They made many dear friends in that neighbourhood over the years and were very fortunate that some of their childhood friends built homes nearby as well.
Olga and Walter could not have children of their own and adopted their son David in 1967. He was a demanding child who was always hungry, but Olga and Walter were model parents, and did everything right to patiently appease their growing boy. He was given all the love they could possibly give, as well as a kick in the behind when he really needed it. Olga attended every parent teacher meeting, Christmas concert, soccer, baseball, and football game in which their son ever participated. She was great at science projects, colouring inside the lines, cutting and pasting, and generally helping her lazy meathead son graduate from elementary school. In doing so, she eventually taught him to understand that hard work, tenacity and having a conscience were even more important than brains or natural talent.
Olga was also widely known for driving a bright yellow Volkswagen beetle. Because she had a big heart, on the coldest days she often used it as a school bus for her son's friends; sometimes bending the rules, and fitting all of them into the car at once. She was also known by all the neighbourhood kids to be capable of first aid, bicycle repair, playground security, and providing first-rate snacks and cookies, with the occasional hug whenever necessary.
Olga was an avid curler, and devoted time every winter to participate in the sport as part of the Rossmere Ladies Curling Club for almost 30 years, until arthritis made it too painful to throw a rock. Still, she enjoyed seeing her friends, so she made sure to attend the annual curling banquet long after she retired. Olga found enjoyment in the simple things, like long walks, reading, cooking, and the company of friends. She especially enjoyed family road trips to the Rockies, outings to Grand Beach, and winter vacations. She was fortunate to be healthy enough to travel with Wally well into their 80s. Most of all, she loved her family. She was so proud to have been able to live long enough to watch her grandchildren grow up, play sports, and attend university.
In their golden years, Ollie and Wally would enjoy happy hour when they'd share a bottle of wine while sitting in their backyard as they listened to the birds or Ukrainian music on the radio. After Wally's passing in 2018, Olga moved out of her home to an apartment at River Ridge 2 and made many friends. She was quick to volunteer and participate in every activity she could manage, including baking cookies to share with the residents. The staff and friends helped her deal with her grief and made her final years more enjoyable.
Special thanks to Drs. Hurd and Guzman, and physician's assistant Amber. Also thanks to all the nurses and staff at St. Boniface Hospital, who showed such kindness and made my mom's final days as comfortable as possible, and to Father Sam Argenziano for his spiritual support.
Due to the current pandemic, a private burial has taken place.
In lieu of flowers, donations can be made to your favourite charity.