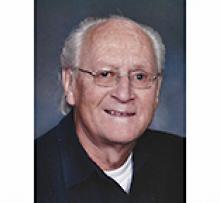 Ernest passed away peacefully at home on March 19, 2021 at the age of 78.
He leaves behind his wife Rolande of nearly 52 years; children, Michelle, Marc (Yasmin), Lynne (Ryan); grandchildren, Ophélie (Ian), Léo and Rosalie; his sister Thérèse (Alfred); sisters-in-law, Jeannette (Adrien) and Lucille; brother-in-law Ed (Colleen); many nieces, nephews, cousins, in-laws and friends.
He was predeceased by his parents, Edmond and Lucie; brothers, René and Albert and sisters, Agnès and S. Rita m.o.
Ernest was raised on a farm in Ile-des-Chênes. He spoke fondly of his farm life and relished every memory. He married Rolande Johnson of Lorette in 1969 and soon after, returned to his farming roots in Ile-des-Chênes, where they bought a small farmstead on the outskirts of the town. Although very demanding, he enjoyed it. He taught himself how to build, repair and master new skills, all the while working for Canada Packers. He was hard working, determined and unable to sit still until all the tasks were done to perfection. Years later, they moved to Winnipeg, which led him to pursue the property rental business, which he excelled at as owner manager. Later, he took on another project; to build his cottage on Davidson Lake in Eastern Manitoba. It would be his pride and joy. He loved being there, puttering around, hosting friends and family and watching the birds and boats go by.
His most precious times were spent with his grandchildren. He was involved in their lives; babysitting, chauffeuring and attending their school and sporting events. He made them laugh with his funny (mis)quotes and he listened to them. He genuinely loved to hear what they were up to. He was their beloved Pépère!
Ernest enjoyed travelling throughout the USA, Mexico, Europe and especially visiting his cousins in Belgium. He also loved and enjoyed the happy hours spent in Mesa, AZ.
How did he manage it all? He had a work and life partner with Rolande. They worked side-by-side and depended on each other for everything. Even though we joked about it, we will all miss him saying ten times a day, "Where's mom?" He always wanted her near him. He cared, loved and respected her so much.
He fought a valiant battle with cancer for more than 20 years and suffered many illnesses throughout his life. He did not allow those setbacks to define who he was. He never complained about his aches and pains. He always remained positive and loved his life.
A service will be held at a later date.
In lieu of flowers, donations may be made to CancerCare Manitoba.