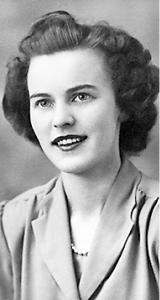 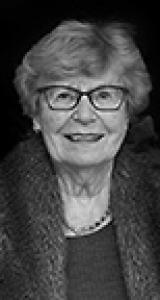 It is with sadness that we announce the peaceful passing of Constance Rennie into the presence of her Lord Jesus Christ on March 25, 2021 at the age of 97.
Constance leaves to mourn children, Vivian, Ruth (Bruce) and Bill (Joanne); grandchildren, Jennifer, Jonathan, Liana, Hans, Brendan, William, Rachael, Leah, Dustin and Addison; great-grandchildren, Jordan, Joshua, Frances, Faith, Aneilia, Liam, K'veon, Malachi, Lucy, Lochlan and Orin; son-in-law Lon; as well as many cousins, nieces and nephews. She was predeceased by her husband Bill; her daughter Nancy; her parents, George and Mary Keeling; and her siblings, Ernest, Lois, Mildred, Mary and twin sister Florence.
Connie grew up on Arlington Street and attended West End Gospel Hall which provided a firm foundation for her life. Her beautiful soprano voice was the highlight in several Gilbert and Sullivan productions at Daniel McIntyre High School. Music was an integral part of the Keeling household and Connie sang in a trio with her sisters, Florence and Mary. When they performed at Elim Chapel, she caught the eye of a handsome young RCAF officer who became the love of her life. Connie and Bill were married in 1944, and shortly thereafter he headed off to war.
That same year Connie and Bill became founding members of Bethesda Church, a strong community born out of faith and hope. They both enjoyed the singing and fellowship of the church choir for over 60 years. Connie was active in many aspects of church ministry but it was missions that attracted her most. Her gift of hospitality extended to many meals for missionaries who visited our home, including a family of five who stayed with us while looking for a house of their own. Connie always quoted the verse, "you may be entertaining angels unawares". Her meals were legendary and appeared effortless. Connie enjoyed nothing more than a table full of family, friends and soon to be friends.
Connie's longevity can be attributed to a very active lifestyle. Besides raising four children, she enjoyed family picnics and games, wiener roasts at Garson quarries, hosting scrumptious dinner parties, playing violin in the St. James Pop's Orchestra and golfing at the St. Charles Country Club.
Connie served on the boards of Providence College, Focus on the Family and the Convalescent Home, as well as owning Tredwell's Music Centre in the 1970s. She led Bible classes through Flora House, taught new Canadians ESL, and, in 2003, was presented with the Distinguished Christian Leadership Award from Providence College.
Travel was one of Connie's favourite pastimes which allowed her to keep close contact with her dear cousins in Ireland and England. She and Bill enjoyed trips and winter vacations in Palm Springs with sister Tore and her husband Henry. She travelled to India to visit a church she had built in memory of her father, George Keeling, who was converted during his service in India as an officer in the British Army. Young George heard the Gospel at a Salvation Army service and his life and the lives of his descendants were changed forever.
Mimi, as Connie was known to her grandchildren and great-grandchildren, delighted in their company and spent many hours babysitting, travelling to visit those who lived away and taking them on trips.
Connie will be remembered for her boundless energy, gift of hospitality and great sense of style. Stunningly beautiful in her twenties, she was still turning heads well into her nineties. She was dearly loved and will be deeply missed. She looked forward with keen anticipation to going Home to be with the Lord, and to seeing her many loved ones gone before, particularly her beloved husband. It is fitting that God chose March 25, Bill's birthday, as the day they would be reunited.

Deuteronomy 33:27 The eternal God
is thy refuge, and underneath
are the everlasting arms.

John 11:25-26 Jesus said: I am
the resurrection and the life: he that believeth in me, though he were dead, yet shall he live: and whosoever liveth and believeth in me shall never die.

In lieu of flowers, memorial donations may be made in Connie's honour to the Salvation Army, Providence University College, or Intercede International, 201 Stanton Street, Fort Erie, Ontario, L2A 3N8.