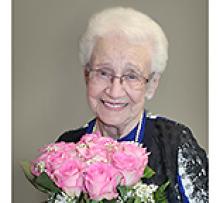 Our mother, grandmother and great-grandmother, Carrie Falkingham (née Johnson), passed away peacefully, with family by her side, in Winnipeg on March 25, 2021.
She will be lovingly remembered by her children, Jim (Gwen) of Toronto, Lance (Veronica) of Halifax, Debbie (Bill) of Alberta and Rob (Maureen) of Winnipeg, and nine grandchildren, Chris (Poornima), Melissa (Durwin), Carrie (Jay), Scott, Ryan (Teresa), Steven (Karen), Jessica (Chad), Dale (Michele) and Judy. She waited patiently for great-grandchildren and, eventually, they came in spades with Sam, Katie, Colton, Brooklyn, Aurora, Henry, Madison, Lincon and Martin joining her family, each holding a special place in her heart. She was looking forward to more great-grandchildren including another this summer. Carrie is also survived by other family members across Canada and in Sweden. Carrie was predeceased by Stan, her loving husband in 1999, her brother Albin (Gladys), and her parents, Elis and Eva Johnson.
Carrie was born at home in Stephenfield, Manitoba 98 years ago. Her family homesteaded near Nora, Saskatchewan in 1922 when she was only six weeks old. As a young child, she developed her strong work ethic through her farm chores and the example set by her parents. She attended Normal School in Moose Jaw during the Second World War where she received her teaching certification. She taught in one-room school houses for five years in and close to Nora, Saskatchewan.
Carrie met Stan at a Christmas Concert when they were 11 years old. Their relationship grew over the years and they were married in 1944. They settled on a farm south of Nora with their young family. In 1958, they moved to Manitoba where Carrie continued her career as an elementary teacher. She taught at Britannia School in St. James until her retirement in 1979. She and Stan spent many happy years in Paradise Village and their winters in Texas with friends. Carrie was a member of North Kildonan United Church and lived at Concordia Village for the last 11 years.
Carrie was a gentle, kind and strong woman with a smile for everyone. She was loved by family, friends, and everyone she touched. Mom will always live in our hearts and cherished memories.
The family would like to thank the staff at the Health Sciences Centre for their care, support and compassion in Carrie's final days.
In lieu of flowers, please consider donations in support of Type 1 Diabetes Research through JDRF at https://www.jdrf.ca/
A private service will be held at 2:00 p.m. on Saturday, April 10, 2021. You are invited to join us virtually by accessing the livestream link at www.greenacresfuneralhome.com in the upcoming services tab.