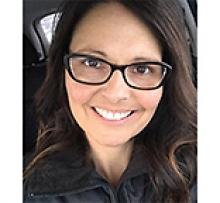 It is with heavy hearts and deep sorrow that we announce the untimely passing of Lorette Lajoie at the age of 46.
Lorette will be lovingly remembered by beloved daughter Avery (father Ash), partner Shayne, brothers, Ray, Guy (Lucia) and Claude, brother-in-law Garry, nephews, Nicholas, Jeremy and Daniel, canine companion Furley, and numerous family members, friends and acquaintances. She was predeceased by her father Marcel, mother Bertha and recently by sister Claudette.
Lorette was the baby of the family, raised mainly by her mother on the homestead near Richer, attending high school at Ste. Anne Collegiate. Lorette lived most of her adult life in Winnipeg, but for several years also resided in Kenora and Dauphin. Everywhere she went, Lorette made close and lasting friendships. Her beautiful smile, infectious personality and kind heart drew people to her. She loved the game of baseball, and for many years played slo-pitch with good friends. Her favourite team, the Toronto Blue Jays, won their season opening game two days after her passing, and we like to think it was in honour of Lorette, as opening day for the Blue Jays was one of her favourite days of the year.
Lorette was extremely proud that her daughter Avery had grown to be a responsible young woman who is excelling at the start of her university career.
In recent years, Lorette worked in the office at the University of Winnipeg Collegiate, and considered it a joy to be interacting with the students and brightening their day with positivity and kind words. She felt it important to make a difference in the lives of her students, no matter how small the gesture. It is apparent from the many thoughtful words she received from the students in return that she succeeded.
A private service will be Saturday, April 10, 2021 at 10:00 a.m. and will be livestreamed via www.greenacresfuneralhome.com.
Donations, in lieu of flowers, may be made to the Winnipeg Humane Society, 45 Hurst Way, Winnipeg, MB R3T 0R3.