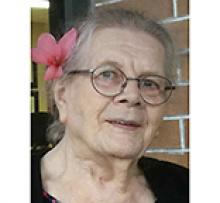 Our mother, Frances Unger (nee Toews), passed away on Friday, April 2, 2021, at Rest Haven Nursing Home in Steinbach, MB, at the age of 90. Most of her life was spent in the Greenland area.
Mom was born on January 26, 1931, to Martin C. and Elizabeth Toews, the oldest of ten children. The Toews family owned a grocery/convenience store in Greenland, which was likely mom's first job. Mom's father was dealt a cancer diagnosis at a young age, and as a result, mom became a surrogate mother to her younger siblings, while our grandma tended to her ailing husband. This included ensuring that her siblings had new clothes for special events, which mom would have either paid for, or sewed herself. To this day, her younger siblings speak fondly of the close relationship they enjoyed with her, right to the end of mom's life.
As an adult, mom enjoyed work in the sewing factory in St. Pierre, and in the kitchen at the Princess Elizabeth Hospital in Winnipeg, MB, where she made many friends whom she still talked about until quite recently.
One of mom's dearest friends as a young woman was Mathilda Unger, dad's sister, and it was through her that she met our dad. In 1955, mom accepted a job at a lumber camp at Mile Eighty as a cook, where dad was also employed. That cemented their relationship, and they were married on May 5, 1956.
Their early married life had them living first in Marchand, where Norm and Rick were born, and then in Bristol, where Gil, Deb and Brenda joined the family. They then purchased the farm in Greenland where mom had grown up, and Ray joined our family as its sixth and final member.
Mom had her hands full with six kids, and all the cooking, laundry, baking, chores, yardwork, and canning that entails. As we grew up, we, as kids, would bring home friends at any time of day or night, and mom never complained, gladly setting another place at the table. Our family gatherings often included a stray friend or two, and it wasn't until we were older, that we realized what a gift our mom had, in taking in teens in our area who, for one reason or another, were not welcome at home. She was kindness personified, and this was evident to anyone who met her. Mom was the epitome of grace and acceptance with anyone she met.
Our mom was a firm believer in recycling long before it became fashionable. Lists and keeping notes was a strong suit, something she passed on to several of her children. Cleaning out her house in 2018, we discovered the prices of Campbell's soup in 1973, because really, why wouldn't you keep your grocery lists for 45 years! Everything could be upcycled, and mom was clearly ahead of the pack in that regard.
After mom and dad retired from farming, they built their dream home just a ¼ mile from the farm, where they lived until dad's death in 2012. Mom remained at home until 2018, when she moved to Rest Haven, where she lived until her passing. Even during her stay there, she was often the first person to greet a new resident, welcoming them and making them feel at home. This last year, however, has been difficult with multiple lockdowns, her own battle with COVID, and the loss of two sons, a sister, and a sister-in-law in the space of five months. And though she never complained, the grief was evident, and she longed to be reunited with her husband and sons.
She will be dearly missed by her four children: Rick (Katie) Unger, Deb (Rick) Loewen, Brenda (Carson) Isaac, and Ray Unger; her daughter-in-law Susan Unger, 24 grandchildren and their spouses, 38 great-grandchildren, five siblings: Anne Fullerton, Liz Jones, Alvin Toews, Norma Toews, and Janet Toews; and sisters-in-law: Elsie Toews and Irene Toews; as well as Bill and Laverna Unger, Eva Unger, and many nieces, nephews and friends.
She was predeceased by the love of her life, our dad, Abe in 2012, and two beloved sons: Gil in August of 2020, and Norm in October of 2020; two great-grandchildren: Jackson and Karalyne; her siblings: Donald Toews, Harry Toews, Alice Toews, and Josephine Toews; her sister-in-law Marlene Toews, brothers-in-law: Wayne Jones, George Ivosevic and Jan Bron; and many Unger brothers-in-law and sisters-in-law.
A come and go viewing in groups of 25 people at a time will be held on Saturday, April 10, 2021 from 1:00 p.m. to 4:00 p.m. at Birchwood Funeral Chapel, Steinbach, MB., with a private family burial taking place immediately following, at the Kleefeld EMC Church cemetery. A funeral service is pending, when restrictions allow for a larger crowd to attend.
The family would like to thank the staff at Rest Haven for the care they provided to our mom, specifically Dr. Krahn, Sheri, Jen, Gladiola, Yvonne, Giselle and Lorainne – your care did not go unnoticed.
Donations in memory of Frances may be made to a charity of one's choice.