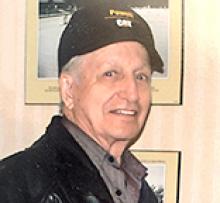 It is with great sadness that his family announce the passing of Louis Montsion.
He will be inconsolably missed by his devoted wife, Corinne, after 68 years of marriage. He will be forever remembered by his four children, Bob, Debbie (Hal), Brian (Kim) and Renee (Steve), five grandchildren, Jeremy (Jaqueline), Mike, Amara (Alyssa), Terrence, Rees, and two great-grandchildren, Hailey and Stacey.
Lou was one of 18 children born on a farm in Sainte Rose du Lac. He proudly told his family that his first job started when he was two years old, holding the door open so his brothers could bring in firewood. His strong work ethic was developed working as a child on the farm and later, during the Depression, working on other farms to help support his parents and siblings. Later he taught himself to drive various kinds of machinery and trucks, working all over Manitoba before moving to Sudbury to work in the mines. He enlisted in the PPCLI during the Second World War and proudly served until he was wounded in battle. He later returned to Sudbury and resumed work at the mines, securing a coveted position as a crane operator for many years. He knew how to live frugally and before long he purchased a brand-new car. Lou met his future bride, Corinne Gagne, a beautiful, fun-loving nursing student, when visiting his hometown on his holidays. They shared a love for laughter and dancing that lasted his whole life. They eventually moved back to Manitoba with their children and a brand-new gravel truck. Lou was known as an extremely hard worker, often working 16 hours or more a day. He worked many jobs simultaneously, including hauling gravel, snow removal, buying and selling cattle and investing in and managing real estate properties.
Lou enjoyed playing cards with friends and family throughout his life and was known for his shrewdness, incredible card sense and frequent winnings on poker night. Lou and Corinne went dancing every Saturday night at the Legion in Winnipeg. He would always insist on staying until God Save the Queen was played at the end of the night. In the last half dozen years, he reluctantly switched to daytime dances until stopping only a couple of years ago. He passed down to his children his strong work ethic, the importance of saving for the unexpected and his work hard play hard attitude. He will be missed by all who knew him for his sense of humour, honesty, loyalty, bravery, and his amazing and often humourous stories of life over the past 100 years.
A private family gravesite service will take place later this month.
We would like to thank the staff on units GB3 and WS3 at the Health Sciences Centre for their compassionate care.