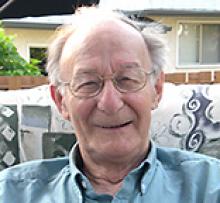 It is with great sadness that we announce the passing of our loving husband, father, grandfather, brother, uncle, cousin and friend, Paul-Auguste (Ti-Gus) Hébert, after a plentiful life, on March 29, 2021, at the St. Boniface Hospital, at the age of 87 years, with his family by his side.
Left to cherish his memory are his wife of 59 years, Pauline (nee Arpin); his children, Rhéal (Evelyn) and Gisèle (Vince); and grandchildren, Eric, Nathalie, Dominic, Paul, Brianne, Chantal, Rhianne and Reid. He also leaves behind three brothers, Hilaire, Etienne (Cécile), and Louis (Marguerite), as well as sisters-in-law, Alice (+Julien), Irène (+Marcien) and Noëlla (+Achille).
He will also be remembered by his wife's family, Simone Préfontaine, Céline Laroche (Arthur), Lilianne Arpin (+Norbert), Agnès Labossière (+Patrick), Lucien Arpin (Dianne), Normand Arpin (Debbie), Pierre Arpin (Gisèle), Yvette Martin, Jeannette Arpin-Foidart and Aline Stabner (Tim), as well as by many nieces and nephews.
He was predeceased by his parents, Cyrille and Adélina (nee Malo) Hébert; his brothers, Julien, Marcien and Achille; brothers -in-law, Norbert and Patrick; sister-in-law Gisèle (in infancy): parents-in-law, Paul and Annette (nee Goulet) Arpin; and son-in-law Chris Symak.
Ti-Gus started working at 16 years of age at Garage Trudel in St. Malo. He went on to work at Supercrete and as a mechanic for Gabriel Tetrault's Shell Garage for 18 years. His last 24 years of work were spent at Versatile, during which he studied for his certified mechanics and received his certificate at the ripe age of 60. He was a member of the Knights of Columbus since 1957. Ti-Gus loved music and dancing and enjoyed playing cards with family and friends. He also loved camping, hunting (even on crutches), and going fishing with his kids and grandkids. He had a special place in his heart for the family dogs and cats, especially Princesse who loved him dearly and is missing him immensely.
Our family would like to send our sincere thanks to the nurses and staff of the St. Boniface Hospital Emergency and 5E wards. We would also like to express our heartfelt gratitude to Lorraine Hamilton for her love and support; to our neighbours for their constant presence, help and prayers; as well as to Dr. Kevin Coates for his many years of compassionate care.
Cremation has taken place, and, due to COVID-19, the celebration of Paul-Auguste's life will be held at a later date.