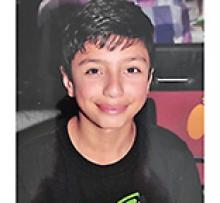 With deep sadness we announce the passing of Nicholas (Nick) Rocky Rosales.
Nick leaves behind his adoptive parents, Carinna and Marco Rosales, and his brothers, Luca and Jesse Rosales, as well as an extensive birth family.
Nick will be forever missed by his grandparents, Nicola D'Abramo and Terry-Lynne D'Abramo, Americo and Telma Rosales, as well as aunts, Nicole D'Abramo and Lizeth West (Matthew); uncles, Alex Rosales (Kenny Boyce), as well as many cousins and extended family.
Nick joined our family at the age of six, a vibrant, outgoing and inquisitive child. He adored dinosaurs, collecting rocks, playing soccer and loved to be outside and was always trying to save injured birds and animals. He also loved Spiderman and often thought he could climb walls and buildings! Nick attended Samuel Burland School and Glenlawn Collegiate and loved skateboarding and video games. He was deeply compassionate and sensitive; always concerned about others feelings, particularly his brothers, Jesse and Luca. He would fondly refer to Luca as his "best brother" and they spent countless hours playing, reading and naturally teaching one another about brotherly love.
Nicholas's teen years were difficult and he struggled with substance use. During this time, he sought out his birth family and this brought him much joy and happiness. Despite his challenges, he remained connected to us the best he could. Nicholas will be laid to rest and our family will have a private service at a later date to honour and remember him. Nick is at peace now, no longer suffering and is surrounded by angels in heaven.
If you so choose, you can donate to the Addictions Foundation of Manitoba or Resource Assistance for Youth (RAY) so that other young people in need of services and support have access to needed programs.

To sign the book of condolences please visit
www.voyagefuneralhomes.com.