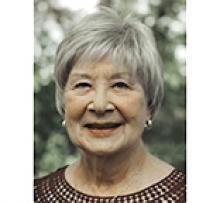 Peacefully, with family and close friends by her side, Doreen Hardern (née Dyck) passed away in her home on Friday, March 26, 2021, at the age of 70.
Left to mourn Doreen's passing are her loving husband Tom; son Mark (Natalie Kerr); daughter Liane (Jordan Duff); and precious grandchildren, Miles and Wesley Duff and Stella Hardern. Doreen is survived by her mother Mary Dyck and sister Leona Hiebert. She will also be missed by her sisters-in-law, Ruth Hardern and Meribeth Hardern; brother-in-law Ian Hardern (Jackie Elmes) and their families. Doreen was predeceased by her father Jake Dyck, brother-in-law Dave Hiebert; and parents-in-law, Ralph and Helen Hardern.
Doreen was born on October 13, 1950, Doreen was raised in a loving home in Morden, Manitoba and graduated from Morden Collegiate. She received her training at the Grace Hospital and graduated as a Registered Nurse in 1971. The majority of her nursing career was spent in the Intensive Care Unit at the Grace Hospital.
Doreen and Tom were married on December 3, 1983 and enjoyed their 37 years together, raising their children in St. James. Prior to her marriage, Doreen enjoyed spending months on end in Hawaii with her nursing friends. She loved to travel and enjoyed vacations in Fiji, Mexico, Australia, Thailand, and various locations in Canada. Tom and Doreen enjoyed taking road trips together.
Doreen was a fantastic cook and enjoyed nothing better than to host dinner parties where guests were treated to her lovingly prepared gourmet dinners. She was also an avid reader and thoroughly enjoyed crossword puzzles.
Doreen's greatest joy was spending time with her grandchildren. She loved them so much and was so thankful that she was able to hold three week old Stella in her arms, just before her passing. Her only regret in life was that she would be unable to watch her grandchildren grow up to adulthood.
Doreen spent the last four years of her life valiantly fighting cancer. In November 2016, she was diagnosed with a rare breast cancer which was treated with surgery. In December 2018, she was diagnosed with lung cancer which required chemotherapy. In the beginning of January 2021, it appeared as though she had conquered both cancers, only to receive a diagnosis of leukemia on January 11 as a result of the treatments she had received for the breast and lung cancers. Again, she refused to give up, even though she appeared both physically and mentally exhausted. Those precious grandchildren became her reason for living. She was presented with a new unproven treatment for leukemia and she agreed to give it a chance. Unfortunately, on March 23, it was decided that treatment would be stopped and on March 26, Doreen passed away peacefully at her home surrounded by close family and friends, as per her wishes.
Doreen was a warrior who fought for life as long and as hard as she could, but she was also a realist who was able to graciously and bravely accept defeat. She was our hero.
In accordance with her wishes, cremation has taken place. A celebration of Doreen's life will be announced at a later date, when we are safely able to come together. In the meantime, Doreen's family kindly requests that her friends and relatives take a few minutes to honour her memory by visiting her tribute page at EthicalDeathCare.com. A photo-biography, as well as memories and stories published by those who knew her, are available there.
The family wishes to thank Palliative Care for all their help and support. Love and thanks go out to all Doreen's amazing friends for their assistance and encouragement.
In lieu of flowers, donations may be made in Doreen's memory to CancerCare Manitoba or to Palliative Care.