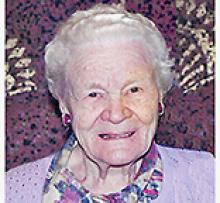 "Minnie" or "Willa", as she was known, was born in Lydiatt, MB, to parents, Gertrude and William, immigrants from Holland to Canada. She grew up on the family dairy farm with sisters, Annie, Augustina and Mae. Having no brothers, the girls grew up with a strong work ethic and worked the dairy farm. Her dad taught her to be independent and to stand up for herself and that is what Mom did her entire life.
When the Second World War broke out Mom joined the Royal Canadian Air Force in 1942 as a parachute rigger, eventually becoming a Corporal in charge of the parachute section in Brandon, MB. Mom was honoured to have had her Air Force uniform used for the creation of the tri-monument statue on Memorial Boulevard. Mom was also featured in a book written by Shirley Grosser called "Resilience - a profile on Woman's Stories of the WW II". After the war, being a creative person, Mom pursued her dream of attending university taking courses in interior design. For a time she worked at Elmwood Furniture and Electric where she met her husband Carl.
Now in their 40s, they settled into the Weston area having two children, Joy and Bruce. Mom had a strong sense of community and enjoyed attending Sparling United Church. She loved growing beautiful flowers inside and out taking great pride in her yard. She grew and canned all types of vegetables grown on the family farm in Rosser, giving away jars of "Wills Dills" and produce. All vegetables were grown organically, and she recycled everything.
She had a small cottage industry making curtains and draperies for customers and could sew and fix anything.
She was a terrific parent and grandparent and always welcomed family and friends who often stayed for a meal. Mom was a great cook and hosted family dinners into her 90s.
Mom was predeceased by her husband Carl in 2010, sisters and spouses. Mom leaves to mourn her daughter Joy (Don) Moore, son Bruce (Shelley), five grandchildren and six great-grandchildren, and numerous nieces and nephews.
Charleswood Care Centre has been her home for 11 years, surviving Covid in December. Our family would like to extend our gratitude to all the staff for their love, kindness and compassion. She said, "They spoil me here!"
Due to Covid restrictions, a small family gathering will take place April 15, 2021.