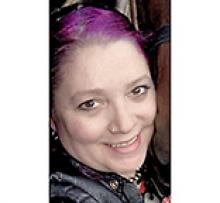 Gerry-Jenn Wilson was born on Christmas Eve, 1968, in Guelph, Ontario.
She died on March 30, 2021, in Maple Ridge, BC.
Gerry-Jenn was raised in Winnipeg, and from childhood till early-adolescence her father, Bob Wilson, was a Winnipeg City-Councillor and Manitoba provincial MLA. Gerry-Jenn's mother during this period, Charlene, was an elementary school-teacher who nurtured her daughter's creative talent. Two days before her 18th birthday, Gerry-Jenn was featured in the Winnipeg Free Press "Teen focuses new magazine on neo-punk music scene".
Gerry-Jenn graduated from Kelvin High. She began her musical-career with Hypnotic Wail in Winnipeg.
In 1990 Gerry-Jenn went to Vancouver, and made an immediate impact on the local "underground" music scene.
She performed with numerous bands until forming her own group, JP5 (1996 to 2001) who released one album "Hot Box".
Gerry-Jenn next formed an all-girl band, The East Vamps (2008 to 2016) who recorded two albums.
In 2018 Gerry-Jenn lost her partner of 20 years, Kevin Williams. In 2019 the two dogs she called her "children", Bucky and Ginger passed away. In 2020 her younger half-sister in Winnipeg, Phoebe Wilson, died.
The last five weeks of Gerry-Jenn's life since moving to Maple Ridge were happier than she'd been in years.
A memorial gathering will take place on August 15, 2021, in Vancouver at Mountain View Cemetery "The Joy of Gerry-Jenn".