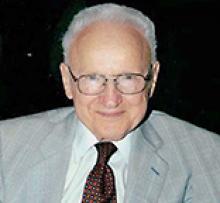 On Saturday, April 3, 2021, our beloved father Nestor passed away peacefully, at the age of 100.
Remaining to forever cherish Nestor's memory are his four children, Greg (Kelly), Tom (Barbara), Paul (Marie), Katherine (Jeffrey); nine grandchildren, Gregory, Jeremy, Joey, Daniel, Ben, Paul, Aaron, Alyssa, Joel; and four great-grandchildren. Nestor was predeceased by his wife Phyllis Mudry (nee Kelso) in 2011.
Nestor was born in Winnipeg on January 25, 1921, the fifth of five children and the only son of Ukrainian immigrants. He graduated from the University of Manitoba in 1944 as a civil engineer and enjoyed a long, distinguished career working as a Public Servant for the Province of Manitoba. Nestor was the chief of the Red River Floodway design team. He was an original member of the Clean Environment Commission and the International Joint Control Commission for the Lake of the Woods. He also served the Engineering profession as National Vice President of the Engineering Institute of Canada. He was honoured for his service by being named as a Fellow of the Institute (FEIC). Nestor was past president and served as a long time member of Winnipeg's Ukrainian Professional And Business Club. He was also an accomplished trumpet player, playing in many local area bands throughout his life. Since 1985, Nestor was a long time member of the Reh-Fit Centre, where he enjoyed daily workouts and socializing with friends.
In lieu of flowers, donations in Nestor's memory may be made to the charity of your choice.