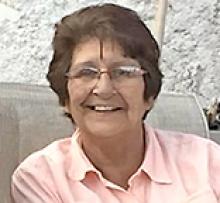 It is with great sorrow that we announce the passing of Annette Marie Welsh on Friday, April 9, 2021 at Riverview Health Centre. Annette was born at the family home near Inwood, Manitoba on October 17, 1945.
She is survived by her siblings, Bea (Bill), Esther, Denise, Bernice (Fred), Art (Tracy), and Eileen (Paul); in-laws, Agnes, Theresa and Rita, as well as numerous beloved nieces and nephews that each held their own special place in her heart. Annette was predeceased by her husband Teddy of 44 years; her parents, Madeleine and Edgar Sanderson; her brother Victor; and sisters, Cecile and Florence.
Annette grew up on a farm near Inwood and attended a one room school approximately three miles from the home until grade eight. She attended high school at Inwood Collegiate then went to work in the Teulon Hospital as a nurse's aide. Her next job was a telephone operator at MTS during which time she met Teddy. Two years after they married in 1970, they moved to Castlegar, BC. She moved back to Manitoba in 1975. One of her longtime jobs was at Paulins in Winnipeg until it closed in 1989. She then went to Red River College, began working with the Manitoba Metis Federation (MMF) in 1991 and retired from there in 2005.
She moved to Poplarfield where she lived until 2018. Annette's favourite hobby was curling and she knew everything there was to know about the sport. She participated in many bonspiels and in Poplarfield was part of a group called the "Gremlins".
Annette took pride in the volunteer positions she held and worked diligently to serve the Metis community. She thoroughly enjoyed attending many MMF events particularly the AGA. But family was the most important to her. She was loving, had a heart of gold and was always there to help.
A funeral service will be held at a later date for immediate family. Urn bearer is Leon Richard.
Honorary Pallbearers are all of her other nieces and nephews.
The family would like to thank the wonderful staff at Riverview Health Centre.
In lieu of flowers, donations can be made to the MMF Bereavement Fund in honour of Annette Welsh.