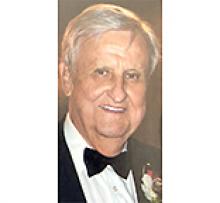 With his endearing son William by his side, John Antoniuk was peacefully embraced by God, on April 10, 2021.
John Antoniuk was born on August 20, 1933 in East Saint Paul, MB to parents, George and Justyna Antoniuk. His passion for sports led him to competitive football and basketball at St. Paul's High School, and later years of coaching the Westend Rams.
He began his career by apprenticing with his Uncle Peter at the Dufferin Hotel, and later partnered with family members to own and operate many hotels. John's favourite and biggest joy came from operating the Nicolett Inn for over 50 years. He was the founder and president of the Northern Curling Club, the Nicolett Curling Club, the Nicolett Fastball League, the Nicolett Shuffleboard League and the Nicolett Golf Club. He sponsored many sporting teams throughout the years from hockey to dog sledding and everything in between. It was, however, his Nicolett Inn Men's Senior League Basketball team that received national attention when they won the Canadian Championship in 1979, 1980 and 1982. The Nicolett Inn Basketball team returned their thanks and went on to name a racehorse Johnny Nicolett in John's honour.
In 1962 John met and married his true love, Alice Sianchuk, from Dauphin Manitoba. It was love at first sight and they spent 54 years together until she passed in 2016. Their whole marriage was filled with love, fun, friendship, and many beautiful holidays together all over the world.
John Antoniuk was a natural leader who not only saw himself as a people person, but he was most comfortable when lighting up a room and building the excitement with every joke that he told.
John Antoniuk was predeceased by his beloved wife Alice, father George, mother Justyna, brother Bill, and sister Anna. He is survived by his four dear children: Justina McCaffrey, Jo-Ann (David) Borger, William (Ania) and Michael (Dorothy), adored grandchildren: Palestrina, Everett and Verona McCaffrey, Hayleigh, Alisa and David Borger, Grace and Mary-Kate Antoniuk, and great-granddaughter: Piper Addison Foster.
The family would like to express their sincere appreciation to all the staff at Holy Family Home. The extraordinary care and support made our beloved father happy and comfortable. Thank You!
In lieu of flowers, donations in honour of John Antoniuk can be made at Holy Family Home c/o Lubov SSMI Foundation.
In accordance to tradition, a private Christian burial has been held, officiated by Father John Sianchuk.

This obituary can also be viewed at www.cropo.com