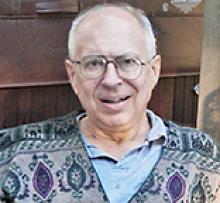 Gregory Nicholas Harasyn, lately of 155 Park St. S., died April 1, 2021, at St. Peter's Hospital in Hamilton, Ontario. He passed away just a few hours before his 70th Birthday.
Gregory was born on April 2, 1951 in Atikokan, a newly developing mining town in Northwestern Ontario. He was the only son of Michael and Katherine (Kay) Harasyn who had come to Atikokan from Winnipeg, MB in 1947. The family returned to Manitoba in 1962 to buy and run 'Harasyn's True Value' grocery store. Greg helped with the store. He attended high school in Teulon and became known for his ability in on-stage dramatic poetry recitations. He attained his Bachelor of Arts Degree from the University of Manitoba - this, despite having to deal with the distracting and disturbing effects that his developing Schizophrenia imposed on him.
After university Greg worked in various retail sales situations in Northern Manitoba and in Winnipeg. With treatment he was able to live on his own in Selkirk, MB for 33 years. He moved to Hamilton to be near his sister and her family in 2014. The move gave him birthdays and holidays with his family - a very enjoyable time for Greg and for his nephews' families who appreciated his quirkiness and his amazing capacity for Trivia.
He leaves to mourn his passing Katherine A. Harasyn (sister); Nicholas W. H. Brown (nephew) and Marianne Brown (spouse), Megan and Jenna; Nathan L. M. Brown (nephew) and Kate Bergsma (spouse), Tatum, Atticus, Emrys; Andrew Brown (nephew) and Karen Wheaton (spouse), Bootsy, Rio and Buster, as well as numerous cousins in Winnipeg, Thunder Bay and Toronto.
Greg's remains have been cremated and will be interred in his parents' plot in Brookside Cemetery in Winnipeg .
The family members here in Hamilton will gather for a celebration of Greg's life when it can be arranged.