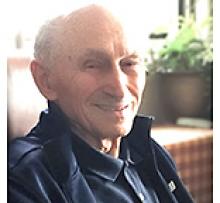 Andre Goussaert passed away at the age of 90 on April 9, 2021, at Actionmarguerite (St. Boniface), Winnipeg, Manitoba.
Left to mourn are his loving wife Beatrice (Huysentruyt) and daughter Vera, and his extended family in Ontario and Belgium. He was predeceased by his parents, Victor and Flavie (Denorme), and siblings, Anna, Paul and Marieke.
Born on October 3, 1930 in Beveren-Leie, Belgium, Andre lived an exceptional life. In 1949, after completing his high school education in Waregem, Andre joined the novitiate of the Oblates of Mary Immaculate (OMI). In 1955 Andre was ordained a priest and in 1956 moved to Canada's Arctic as a missionary. It was in Canada's Arctic that Andre followed his passion and put his values into action when he started working with the Inuit to develop co-ops. Living and working in the North, Andre had many adventures and learned many lessons, including the power of cooperation, self-determination, and social and economic justice. In 1980 Andre was recognized for his work with the Inuit when he was inducted as a member of the Order of Canada.
Having met Bea while living in Cambridge Bay, it was clear that they were destined to share life's journey together, and upon moving to Yellowknife in 1980 their daughter Vera was born. The family of three moved to Winnipeg in 1985, a city that has been home ever since.
While he retired in 1990, Andre never stopped living his values and following his passion. He continued his life's work through volunteering and sat on the Boards of Red River Co-op, Boni Co-op, the Manitoba Co-op Council, LITE and Development and Peace. He was an exceptional father and devoted husband. He always made time for his family, and showed endless love and compassion through his actions and his presence in their lives. Andre built a network of friendships, particularly the "Coffee Gang" from St. Ignatius, with whom he could spend hours debating the day's news, discussing philosophy and theology, or just making small talk.
In the past few years the affects of Parkinson's took hold on Andre. The dementia associated with Parkinson's lessened his ability to tell stories and share conversations with those he loved. Despite this, Andre could still light up a room with his smile and his family and friends continued to cherish the time they were able to spend with him. Andre was a man of deep faith and that provides peace and comfort.
As a result of pandemic restrictions, a private funeral mass was held at St. Ignatius Parish with Fr. John Perry, SJ officiating.
In lieu of flowers, please make a donation to a charity of your choice - as Andre did throughout his life, follow your passion.
The family would like to thank the staff at Actionmarguerite 2DE for their care and compassion over the last three years.