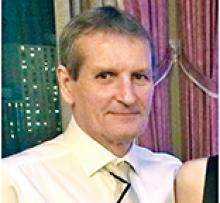 It is with heavy hearts we announce the sudden passing of Robert (Bob) Walter Crawford, at his home, on April 8, 2021, at the age of 65.
Bob was born in Saskatchewan and spent his youth growing up in Peace River, Alberta. It was there that he met his wife Norma of 40 years, married in 1980. A few years later they would move to Winnipeg to raise their family. An auto mechanic by trade, Bob always made himself available to anyone with car troubles. He was extremely generous, and always eager to give gifts to people and items that he "didn't need anymore". He had a love for sport, both coaching and playing baseball, serving on the Assiniboine Park Rangers Hockey board, and later developing an appreciation for golf.
Once his children had left home, Bob and Norma enjoyed hosting exchange students from Europe who became like family. He was always joking and teasing - family or not - it was the way he shared his love. Bob also had fond memories hunting with his father-in-law, but in his later years much preferred to watch deer from afar. He always had a soft heart for animals. He had dogs and cats that usually Norma brought home - he ended up spoiling. Bob loved seeing the wildlife around his retirement property in the Grand Beach area and was really looking forward to spending more time with his friends and family once the world got back to something more normal.
Bob was predeceased by his parents, Charlie and Jeanette Crawford, brothers, Norman and David. He is survived by his wife Norma Crawford (nee Shabaga), and his children, Dustin Crawford (Kyra) and Meagan Metcalfe (Tyler), as well as his grandchildren, Logan, Benjamin, Emmett, and Halle, and his European daughters, Alice, Jill, Natascha and Veronica. And of course man's best friends, Sullivan and Georgia. He will be very missed by all.
In lieu of flowers, please donate to the Winnipeg Humane Society.