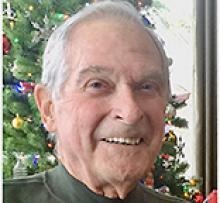 Ross passed away peacefully on April 12, 2021. He was 88 years old.
He will be lovingly remembered by his wife Ruby, children, Doug (Donna), Janis (George) and Scott (Anita); grandchildren, Lisa (Andrew), Sean (Brittney), Darian (Matt), Yale (Emmalee), Emma and Maggie; great-granddaughter Hayley; sisters, Muriel (Dale) and Jean (Larry); brother Don; nieces, and nephews. He was predeceased by his wife Marie, his parents, Albert and Elsie, brother Bruce, and parents-in-law, Clifton and Sarah Spence.
Ross was born in Aurora, Ontario on October 9, 1932. He left school when he was 16, went to work at Sisman Shoes in Aurora, and became plant manager by age 30. He married Marie Spence on June 30, 1956, and they raised three children, Doug, Janis and Scott. In 1967 they bought a cottage on Davis Lake near Kinmount, ON, where they created many happy memories together. The family moved to Winnipeg in 1975, where Ross became vice-president of sales at Dominion Tanners, developing many great relationships with his customers. He retired in 1997 after 22 years at the tannery.
Ross and Marie bought a cottage at Grindstone Park in 1986. The family has many great memories of their time spent at the cottage. Ross lost Marie in 1995, having shared close to 39 years together.
Ross and Ruby met at work, and they became partners early in 2000, marrying in 2012. They enjoyed winters in Barbados, and later in Puerto Vallarta, Mexico, and took several trips abroad. They also enjoyed summers together at the cottage.
Ross was known for his sense of humour and his smile. He made an impression on those he met and got to know. He was a gentle man, and a gentleman. He loved spending time with his grandchildren, and later his great-granddaughter, and made many special memories with them. Ross also was a man who could fix most anything, and spent many hours with each of his children in their homes, fixing, painting, building - you name it. He loved to tinker at his workbench and put something back together, or create an alternative.
In his latter years, Ross accepted that age had slowed him down, and that he couldn't do everything he once did, but he took it on with dignity, never complained, and continued to live life joyfully.
The family would like to express their thanks to the team in the ICU at Grace Hospital for their compassionate care of Ross.
A private family inurnment will take place.