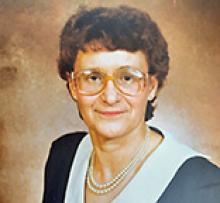 Our mother, Ella, passed away on April 12, 2021, at Middlechurch Home where she resided for the past seven years.
She was predeceased by all of her siblings: Rose Karpa, Mary Bahrychuk, Kay Pilot, Eugene Ogryzlo and Ann Ogryzlo; and by her son-in-law Peter Veselinovich.
Mom was born in Fenwood, Saskatchewan on November 25, 1926 to Stephan and Fevroni Ogryzlo, where she grew up on a small prairie farm. She had a poor but happy childhood that she looked back on with fond memories. Education was very important to Mom. She graduated from Sacred Heart Academy in Yorkton, Saskatchewan, receiving the gold medal for the highest marks in Science. She attended the University of Saskatchewan in Saskatoon, then Teacher's College in Moose Jaw, Saskatchewan.
Mom worked as a school teacher in a few rural Saskatchewan one-room schools before marrying Arnold Kachkowski in 1953. They lived in The Pas, Brandon and Inglis, Manitoba before settling on a farm in Clarkleigh, Manitoba. With four daughters under eight, and one a newborn, Mom's life was not easy, going back to teaching full time and being a farm wife with no running water and harsh conditions. She did all the things that a farm wife in the 1960s and 1970s did, including baking, gardening, canning, milking and much more. Mom continued to teach full time for several years, until she left the farm and did office work, retiring from Westburne Electric in 1991.
Mom loved clothes, sewing all of our dresses and clothing when we were young. Shopping for a bargain was a lifelong pleasure. When Mom moved to Winnipeg she had an active social life with ballroom and line dancing, aerobics and yoga classes and going to the theatre. Later, she took university classes, and joined Toastmasters (a surprise perhaps to those who knew her as a quiet person). Mom had a passion for travel, a European bus tour with her sister May being a highlight as well as travels with her sister Kay.
Mom was a big help with her grandchildren, and her little house on Winterton was a favourite family stop and was often packed for family gatherings.
Mom's faith was always a very important part of her life. She was raised in the Ukrainian Orthodox Catholic faith, and was a devout Roman Catholic in her adult life. She was a member of St. Alphonsus Parish, and for a short time in her later years a resident in St. Benedict's Monastery.
Mom leaves to mourn her four daughters, Karen Goodridge (Dean Pritchard), Penny Malegus (Richard Malegus), Sherri Jacobucci (Randy Dziadek) and Tammy Veselinovich. She also leaves her grandchildren, Adam Wedensky (Sheryl), Shea Koch (Jocelyne), Jesse Jacobucci, Emerald Savary (Kory), Bailee Krahn (Josh), Curtis Veselinovich and Mandy Veselinovich; as well as great-grandchildren, Ella, Joseph, Joanah, Carmelle, Calder and Jude.
Mom's eyesight failed in her later years and she drew great support from CNIB. Donations in her memory to CNIB or the Alzheimer Society of Manitoba are welcome.
A small family funeral will be held on Saturday, April 17 at Glen Eden Funeral Home.

Condolences may be sent to glenedenmemorial.ca