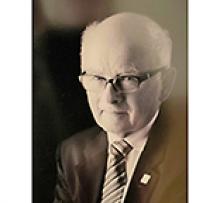 It is with heavy hearts the family would like to announce that Georg Gustav Dawert passed away on Friday, April 9, 2021 at Victoria Hospital.
Georg was born is Gros Sausgarten, Germany. He apprenticed and studied to become a Master Butcher and Sausage Maker. He wanted to see the world, so in 1961 he travelled to Mexico, Canada and the United States. He married Rita, the love of his life in 1963 in Germany. They decided to continue their adventure and moved to Winnipeg. Winnipeg became home where they raised their three kids, Ralph, Helen and Nancy. He worked at a number of meat packing plants in St. Boniface over the years. In 1979, Georg and Rita decided to open their own business, Portage Meat and Sausage Deli, which continues to serve his homemade recipes after more than 40 years.
He loved fishing, boating, foraging for mushrooms, blueberries and raspberries on the weekends. He had a green thumb and passed on the love of gardening to his kids. His love of travelling and adventure continued throughout his life. Cruises to Hawaii, Alaska, Caribbean were some of the favourites. Georg and Rita also returned to Germany often to visit family and friends.
He was a devoted husband, father and grandfather and he will be greatly missed by Rita, Ralph (Denise), Nancy (Mike), Helen, Kyle Steven, Alexandra, Elizabeth (Chris).

We love you pup and miss you!

The family would like to extend their gratitude to the doctors and staff on the 5th floor 5 South at Victoria Hospital, your care and compassion were such a comfort during this difficult time. We would also like to thank the many home care workers that have worked with him at home.
No formal service will be held at this time.
In lieu of flowers, donations can be made to a charity of your choice.

Expressions of condolence for Georg
can be made at richardrosin.ca.